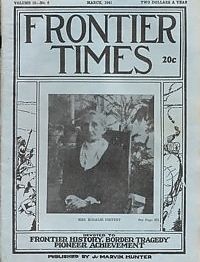 SOME SONGS OF YESTERYEAR

Moses Jackson was born in North Carolina but his father moved the family to Mississippi when Mose was a very small child. They settled at and founded the town of Jackson, Mississippi. The elder Jackson was a blacksmith and started the town that now bears his name. When Mose grew up, he married and moved to Texas. He finally settled in Brown county, in the Northeast part, on Pecan Bayou. There were twelve families in this neighborhood banded together for mutual protection against the Indians. Mr. Jackson prospered and his family grew larger until in 1861 the Jacksons had eight children. But the dark cloud of fate was hovering over the happy family. Here is the sad tale.

A Journey On The Historic San Saba

The Inauguration Was A Jubilee

Account of the life of William Sidney Porter, the writer "O. Henry" who lived what may have been the most important years of his life, in terms of his development for later fame, on a ranch in Texas. Nowhere, perhaps, could this impressionable young man have found an environment more conducive to his love for adventure than in Texas. In 1882, when Dr. and Mrs. Hall of Greensboro came to Southwest Texas to visit their sons, Lee, Frank, and Dick, they brought Will Porter with them. Dr. Hall feared that Will was developing tuberculosis and thought the climate would benefit him. At that time Lee and Dick Hall with their families were living on a ranch in La Salle county, about thirty miles from Cotulla. Though the parents stayed more than three months, when they did return to North Carolina they left Will, who chose to remain on the ranch. Here is the story of those Texas years in the life of O. Henry.

"Dead Man's Hole" is the rather sinister sounding name of an unusual cavity in a cow pasture some five miles south of Marble Falls in Burnet county. Nor is the name ill-chosen. Historically, the hole is steeped in blood stains and beclouded with many tragic tales of murder and mystery during the musty years of the Nineteenth Century. For, hidden by dense cedar brakes and opening downward with startling abruptness, the foreboding cavity was a convenient spot for outlaws and other criminals to deposit murdered bodies whose discovery would likely have proved incriminating. Here is the story.

Account of the unique features of both soil and climatic conditions that make for the exceedingly rich, but at times, haphazardous landscape and features of the north Texas and the panhandle.

The Captivity Of Herman Lehmann

Account of long-term Indian captive, Herman Lehmann whose family came over from Germany with the Prince Solms colony in 1846, and settled in Fredericksburg, Gillespie county, Texas. Some time after the close of the Civil War they secured a large tract of land on the waters of Beaver Creek, some 25 or 30 miles northwest of Fredericksburg. It was in May, 1869, when Hermann was captured as a young boy by a large party of mounted Apaches. He later resided with the Comanches. This is his story and it includes a couple of old photos of Mr. Lehmann.

"When the Indians who had captured Herman reached their village, the boy captive became the object of particular attention on the part of the squaws and children. They would gather round him in large groups, and each young Indian vied with the others in heaping taunts, sneers and insults upon the boy. These he bore with stoicism and sullen silence the first day, but when the rabble of the tribe gathered about him the second day and began their savage pastime at his expense, the spirit of his brave mother rose up in him, and with a desperation most unexpected in one so young, he lay about him with rocks, clubs, or whatever else came within his reach, and soon put the rabble to flight. His pugnacity was greeted with shouts of laughter and uproarious cheers on the part of the men who had witnessed the affray, and from that moment he received all the kind treatment that the savage mind was capable of bestowing. He was initiated into the tribe and became to all intents and purposes a full-blooded Apache. He was adopted into a family and given an Indian name…"

An Interesting Trip To Mier, Mexico

Author Elmer J. Edwards, Jr. of San Antonio, Texas describes historical trip to the city south of the border that, in the minds of all Texans, will forever be a symbol of tragedy, brutality, infamy and courage.