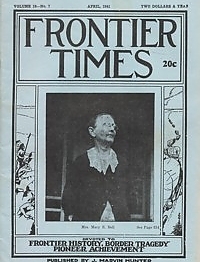 Some Songs of Yesteryear

THE OLD STEP STONE - JOE BOWERS - N'GER ON THE RUN

Battle Between Rangers And Comanches

Account of battle with a band of Comanche Indians, December 23, 1850, near the Neuces river, 75 miles south of San Antonio, involving a detachment of Texas rangers under command of Lieutenant Ed Burleson, Jr. The detachment of rangers under Burleson were on their way to Fort McIntosh, at Laredo, to spend the Christmas holidays. It was a cold morning and the rangers rode together in happy mood in expectation of a merry Christmas with comrades at the fort. Instead, they encountered the Comanches - here are the details.

Account speaks of the Trail Drivers' monument at Doan's Crossing on Red River. This beautiful monument was erected by a a handful of North Texas trail drivers and patriotic citizens of Vernon and Oklahoma, the largest subscriber being P. P. Ackley, who donated $1,000 It was built by George W. Backus of Vernon out of Texas gray granite, and is 10 feet 6 inches high, 5 feet wide. and 12 inches thick.

Some News Items Of Long Ago

Swimming Cattle Across The Canadian

Vivd and detailed account of the cattle drives made by the mighty XIT drovers and especially of the process of driving cattle across the Canadian River.

Mentions: In 1898 there were three divisions of the XIT ranch lying south of the Canadian River—the Escarbada No. 5, Spring Lake No. 6, and Yellow House No. 7. * Buffalo Springs division * Channing * Trujillo 5-wire * the Rita Blanca * Ealy Moore's horse pasture * Dalhart

Peregrinations Of A Pioneer Printer

Hunter reflects on the changes that have come to printing since the 1890's when he began to set type on the old Menardville Record at Menardville, Texas.

The First Presbyterian Church was started in San Antonio in 1846 by Rev. John McCullough and it was the first Protestant church erected in the Alamo City. When Rev. John McCullough first came to San Antonio in 1842, he wrote that there were only three or four American families here and half a dozen reckless young men. He came here again in April, 1844, with Rev. John Wesley De Vilbiss, a young Methodist preacher.

Brother De Vilbiss was to preach and Brother McCullough was to close the service with a hymn and a prayer. Just as De Vilbiss was about to start his attentive host placed a bottle of port wine on the table, to the pronounced embarrassment of the young preacher who thought that now his congregation, the first Protestant congregation in San Antonio, would consider him a hypocrite, who preached against drinking and then drank himself. He asked his host to kindly remove the bottle, but his host demurred and said it was a really fine quality of port and in his country it was the custom to provide a bottle of wine for their preachers, as it usually improved the sermons and this was "a first rate article."

Rev. John McCullough followed Brother De Vilbiss and this is the story of the first Protestant service in San Antonio.

She Danced With Sam Bass

Account of a San Antonio woman who said she danced with Sam Bass three nights before he died at Round Rock, Texas, from effects of Ranger George Harrell's bullet. Mrs. Rebecca Nelson, then Miss Rebecca Stephens, was attending a dance at the Eppler farm house near Red Rock in Bastrop County, on Thursday night, July 18th, 1878, when a stranger rode up. Some of the young men went out to talk with him and when they came back they seemed excited. "It's Sam Bass," they told the girls, "and he wants to dance. It would be better if you girls will dance with him." Here is Mrs. Nelson's account of that event.

A Correction By Worth Ray

A correction to the story by Dr. A. B. Reagan, entitled "A Journey on the Historic San Saba.," in which mention is made of the running fight of "G. W. Morrow and Bill Miller" on their way home from the Rose Mill, when attacked by a band of Indians January 17, 1868. Account further includes more details on Morrow's life as well as first hand account of the fight between Morrow and his companion Miller and the Indians, written by A. W. Morrow in 1888, and which has never before been published.

The Daniel Boone Of Texas

Account of notable Texas frontiersman, Indian fighter, soldier, Ranger, and hero William Alexander Anderson Wallace, (Bigfoot) a young man of twenty, who could not forget the brother and the cousins who had gone out to Texas a short time before and suffered a cruel fate at the hands of the bloody butcher of Goliad. War with its hideous consequences was not new to this family, but they could not reconcile themselves to warfare where prisoners were ruthlessly slaughtered. Wallace men for generations had been large powerful men and bold warriors. They were direct descendants of those Wallace men renowned in Scotland's turbulent history. In early 1837, young William soon announced to his family that he was going to Texas and spend the rest of his life there killing Mexicans, hoping that among them he might meet some of the executioners of Goliad. Though briefer than Sowell's or Duval's biographies of Wallace, this account is a faithful and delightful picture of the man who was Texas' own true "Daniel Boone."