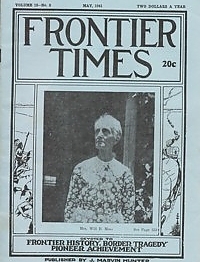 Account details Abel Morgan's experiences at Goliad and his sojourn in Mexico. It is Abel Morgan's own story, written by himself beginning with an account of Colonel Fannin's plight at Goliad.

Account of Crim Q. Thompson notable cowboy who spent time in the Panhandle on the XIT range, and in Kansas. He was also a fine fiddler. Here is his story.

Bigfoot Wallace's Tussle With An Indian

Account of hand-to-hand fight in the fall of 1842 between the legendary frontiersman, Indian fighter and Texas hero, and a hostile warrior that ended in Wallace giving the Indian a "Christian burial."

Account describes origination and early history of the the First Baptist Church of Huntsville and has some good early Huntsville, Montgomery county TX history. The record is taken from the first book of the minutes of the church, dated Monday the 16th day of September, A. D. 1844.

This account is excellent very early LLANO COUNTY TX history and genealogy, gathered from original sources. Account includes old photo of Will B. Moss and family. The account also includes autobiography of Susan Tate Phillips which is one of the most riveting accounts of early pioneer depredations and hardships you can read.

By Thos. B. Love, Dallas, Texas

Account describes a threatening letter sent to Sam Houston from President Lincoln, indicating the course of events that Lincoln would begin to enact upon the state of Texas if they dared to secede and join the Confederate cause.

Crossing High Water In A Wagon

Account of Mr. Aten who resigned as Sheriff of Castro county inn 1895 to accept the management of the Escarbada Division of the XIT Ranch and remained with the Company until the fall of 1904.

On The Buffalo Range Of Texas

Excellent and very detailed account of the techniques, lifestyle and characteristics of that unique breed of frontiersman - the buffalo hunter.

After the Indian outbreak in the Panhandle and No Man's Land, the buffalo hunters retired front those sections, the southwestern part of Kansas and what is now Oklahoma, most of them going to Fort Dodge, which had already superseded Fort Hays as the market and trading point of the buffalo hunters. The question with them now was to find a hunting country where the hides could be gotten to market and operations continued. It was well known that buffaloes were plentiful on the prairies of Western Texas, but to reach this section it was necessary to travel more than 500 miles by the most direct route, through an unknown country, a considerable part of it infested by bands of marauding Indians. Eight to ten miles per day was the limit distance that could be covered by the big ox-teams of the buffalo hunters, and to travel a distance of 500 miles under such circumstances, having no positive destination and to probably find the hunting grounds too far from a railroad point where the hides could be marketed and supplies obtained, would have been a foolish, desperate venture. It was therefore necessary to investigate before making the move, and to make the investigation necessarily involved great danger and uncertain results. Here is the story.

"Them Was The Days" In El Paso