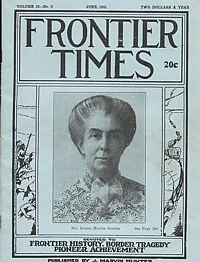 Lyman Wight And The Mormons In Texas

Excellent account of the history of the Mormon settlers in Texas under the leadership of the controversial figure, Lyman Wight, who in 1845, brought the factious religious group to the Texas Hill country, eventually settling in Bandera county. The history of the Mormons in the region is one marked by hopes dashed, scandal and controversy - here is the story. Account offers a detailed description of Lyman Wight's family lines and a timeline of his activities, both prior to and during his time in Texas.

Getting To The Doctor In Montana

Mrs. Burris, who was raised on a remote ranch in Eastern Montana describes the hardships endured by the remoteness of the place and especially in emergency situations where a doctor was needed.

When General Mirabeau Lamar, President-elect of the Republic of Texas, rode up to the present site of Austin, Texas in the fall of 1838, he had as his companion the Reverend Edward Fontaine, his friend and associate, who later became his private secretary during his presidency of the infant republic. This trip by horseback, eventually led to the relaocation of the capitol to it's present location. Though it may seem a little strange to some that the President's secretary was a churchman, nothing could have been more natural than the close association of Lamar and Fontaine. Their lives parallel in several ways : they were both descended from old French-colonial families, who had settled originally in Virginia, the Lamars later moving on to Georgia, the Fontaines to Mississippi; both were scholarly gentlemen of more than average literary attainments, Lamar being rather poetical minded, while Fontaine leaned to scientific studies; and both played important parts in the moral and cultural development of the new Republic. Mr. Fontaine was a great-grandson of Patrick Henry, who also helped to build a new nation. Here is the story of Fontaine's role in Texas history.

Account of Mrs. Louise Marlim Gordon, widow of Captain G. Keith Gordon, of San Antonio, Texas. Born in London. England, April 20, 1851, she lived 90 years full of good deeds, kindness, happiness in brightening the lives of others; years of patriotic devotion to her native country, to her church, to her husband, and loyalty to her friends. She came from England and settled on a ranch in Kimble county with her husband. Here is her story. Contains old photo of Mrs. Gordon and of Capt. C. Keith Gordon.

The King of the County Fair

A chestnut foal on trembling legs
Is nudging his mother's thigh, While Old Trav lolls in the stable shade
And stares with a dreamy eye.
His blood was hot as a lava bed
That rolls from the crater's rim—He sired a thousand colts or more,
And they always looked like him.
A half-smile plays on his wrinkled cheek
As he visions the golden flare
Of June Bug racing the Texas tracks—The King of the County Fair…" etc, etc

Five Forts On The Texas Frontier

Excellent history of the origins, and development of FORT PHANTOM HILL, CAMP COOPER, and CAMP COLORADO.

Some Lost Tribes Of Texas

Account describes certain extinct Indian tribes who disappeared from the earth about two hundred and seventy years ago, but who for a time had their parts in making the history of Texas. These were tribes of wandering Indians, who bore the unsavory reputation of being cannibals as well as nomads. This fact, no doubt, is what led to their extermination, for all the savage peoples, those practicing cannibalism, naturally, were the most loathed. Many of them were hunted down and massacred, while others, unfitted for changed conditions of life imposed upon them by the coming of the whites, died off in rapidly increasing numbers.

Cynthia Ann Parker, when a girl of 8 or 9 years, was captured by the Comanche Indians at old Fort Henderson, or "Parker Fort." Nocona, her captor, took Cynthia Ann out in the open country, and after living and growing up with the Indians, she became Noconas wife. It's a long story—this story of Cynthia Ann Parker and her life with the Comanches—but the early historians of Texas have preserved the best of it for their children, and grandchildren. Here is one of the best and most accurate accounts of her intriguing, yet tragic life. Contains old photos of Cynthia Ann, and Quanah Parker and also of Chief Baldwin Parker, son of Quanah Parker.

The writer (whose old homestead lies beneath its waters), describes Buchanan Dam, second largest of its kind in the world (as of 1941)—multiple arch—backs up the waters of the Colorado River over 26,300 acres.

As told to Zoe A. Tilgman by Former Ranger, Ed R. Outler.

Ed Riley Outler, of Oklahoma City, Oklahoma, tells the story of this last raid of the Indians into Wise county, Texas and of the tragic death of three pioneer women - victims of this sad event which occurred on the 25th of September, 1874.

The Stage Lines Of The Southwest

Describes the earliest development of San Antonio-San Diego Stage Line which used the road from El Paso to Fort Yuma on the Colorado River, and the road from Fort Defiance, NM, to a point on the Colorado River near the mouth of the Mohave River. Account further describes the dangers and hardships that became commonplace for both drivers and passengers, as well as an extremely bloody attack at a stage station at Dragoon Springs, 10 miles below Cochise involving a man by the name of Silas St. John and six assistants.

When A Spanking Was Undeserved

The author describes an event that occurred one late summer's eve in Mason, TX when temptation got the better of a young lad. Mentions: Old Judge Todd * the Mason Herald * Walter Todd * Comanche Creek * Billie Todd

Seventy Years With The Indians

Account of the life of Rudolph Fischer, who was born near Fredericksburg, Texas, the son of German parents who operated a tannery on Wolf Creek, about seven miles north of Fredericksburg. Young Rudolph was 10 years old when he was captured by Comanches in 1870, and spent the next seventy or so years as an Indian - this is his story.

Account of a message roughly scrawled out by a dying man and placed in a bakin' powder can. The contents of that message triggered a search for gold and speculations about riches somewhere high in the Chisos of Big Bend region.

News Items Of Long Ago