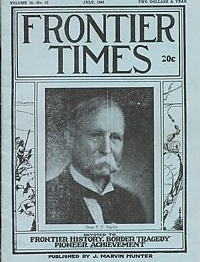 Dean T. U. Taylor Passes On

Here is Frontier Times obituary to Dean T. U. Taylor - a close friend of the editors and a great Texas historian and educator. Dean Taylor's first contribution to Frontier Times appeared in the issue for September, 1924, and thereafter at intervals he contributed historical articles until about 1933, when his articles appeared with regular frequency. He wrote about the early settlers he had known and from whom he secured his data. Here is his story.

A Camp Meeting At Menardville In 1886

When David Crockett left his home in Tennessee to come to Texas, he was a disillusioned and somewhat bitter man. He felt that his friends had turned him down, and he realized that the forces he had opposed so vehemently had defeated him and ruined the brilliant career he had foreseen for himself. For David Crockett had come to think and to speak of himself as a great man, who night some day become President of the United States. But he had trusted his future to polities, and politics, always fickle, had let him down. He did not think the fight had been a fair one, and the questionable methods his opponents had resorted to was the thorn that rankled most in his heart. The disappointment and humiliation was more than he could gracefully accept. The things about him which he had always loved no longer enchanted him. His beloved Tennessee, his home, the forests and the streams where he had thrilled to the hunt and where he had fought the forces of nature with all the vigor of his strong manhood were no longer a joy to him. The untamed wilderness about him was no longer a challenge to his prowess. A discontentment had settled over the famous bear hunter; something had happened to the rollicking, carefree Davy Crockett. What he could not know was that this defeat in which he had reached the lowest stage in his fortunes was in reality that tide in the affairs of David Crockett which was to lead him on to glory. This is the story of his political style, especially of his frankness, down-to-earth manner and of his country-style loyalty to truth and integrity.

A Dalton Tells The Story Of Quantrell

History records that William Clarke Quantrell, whose guerilla-fighting militia struck terror to thousands during the Civil War, died from gunshot wounds in Kentucky during the Spring of 1864. Frank Dalton, uncle of the notorious Dalton gang and cousin of Frank and Jesse James, says Quantrell did NOT die in Kentucky, but recovered and later taught school in Texas for many years. Dalton should know, for he was a member of Quantrell's band. Here is his story.

The Land, A Boon To Mankind

Dabney Herndon Maury came from a distinguished family of Virginia. His uncle was Commander M. Fontaine Maury, the most distinguished oceanographer of his time and Mayor Maury Maverick of San Antonio, is his fourth cousin once removed. In 1854, Lieutenant Maury took station at the "Camp on the Leona," that later became Fort Inge. Here is an account of his life and experiences especially in this post.

Account of the life of former Texas Governor, Joseph D. Sayers of Austin who was born at Grenada, Miss., September 23, 1841, and in 1851 removed to Bastrop, Texas, where he lived for many years, in fact until he was elected governor. It was at Bastrop that he read law under Colonel Wash Jones, a very notable lawyer and orator of pioneer days, who served a term in Congress as a Greenbacker and in 1882 nearly turned Texas upside down as an independent candidate for governor on the greenback ticket. Under the tutorship of this remarkable old pioneer, young Sayers acquired a sound legal training and love of politics, but he never followed his old friend outside the Democratic party. Major Sayers was elected to Congress in 1884 and was relected successively until 1898, when he was nominated and elected governor. No Texan ever stood higher in Washington than Major Sayers. Here is his life, experiences as a soldier in the Civil War where distinguished himself by charging across an open plain in the face of the enemy's fire and capturing a battery of light artillery and as a politician.

Account of the life experiences of A. H. (Shanghai) Pierce, one of the most successful of the great Cattlemen of Texas. After the Civil War he began to buy cattle seriously from all over the state of Texas. He was a good trader and always had good credit. His ranch grew to the size of two or three hundred thousand acres. He branded 1,600 mavericks a year. He Was one of the first cattlemen to become interested in breeding with the "humpies" or steers of Brahma blood. His cattle were known from the Rio Grande to the Canadian line as Shanghai Pierce's sea lions. Here is his story.

Lengthy and detailed account of Captain Neal Colwell who was born in Dade county, Missouri, in May, 1844. His father, Thomas Colwell, was a soldier under General Jackson in the war of 1812, and participated in the famous battle of New Orleans, fought on the 8th of January, 1813. Captain Colwell came to Texas in 1860 and entered what would be a long-standing and notable career as a Texas Ranger Captain, which service he continued in until 1883. The home of Captain Colwell was near Center Point, in Kerr county He married Miss C. E. Martin of San Marcos, sister of the late Judge W. W. Martin.

Account of Mormon Mill in Burnet county by one who grew up near there as a child.

An Essay On Texan Trails

El Camino Real, (the King's Highway), the Old Chisholm Trail, the Old San Antonio Road, are names in themselves reminiscent of rich romance, filled with nostalgic memories, sweet and bitter, of the great Texas and the great Texans of the past. The trails of Texas are the history of the life blood of the people of Texas -- Here is a brief account of the historical significance of the trails.

In the autumn of 1859 a band of Comanche Indians made a raid on some settlers southwest of Austin. The attack was accompanied by the usual murders and thefts of horses and cattle, which the Comanches always employed in their raids. This raid then commenced a pursuit of the Indians by Colonel Rip Ford and his company of Rangers. The Ranger raid resulted in among other things, the capture of Yovrobepo (Nopo) who stayed with the writer's grandmother, a Mrs. Calhoun for a period of years - here is his story.

The Fusee Clock Is A Wonder

The Reunion Of Old Settlers At Bandera

G. P. Hodges, an old settler of Uvalde County, furnishes the facts for this detailed account of Indian trailing by the settlers. In those days, especially during light moons, if a gun was fired at night the near neighbors were up and listening. The presence of Indians was made known by firing guns, blowing horns, or yelling. Runners on swift horses would go day and night to alarm the isolated settlers of a raid, and men would gather to fight them. This account details a raid made in 1871 with Comanches coming east from the Nueces and Frio Canyon and stole horses from Mr. J. F. Patterson. They killed a boy there who was working for Mr. Patterson, taking care of his cow ponies, and shot at Joe Dean, who was standing by the yard gate talking to his brother-in-law, Jesse Campbell. This triggered a trailing of the Indians by nine men from the settlement - this is the story.