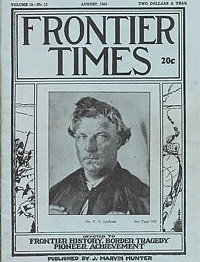 Not a few of these yarns have been spun around that unique character who flourished in Texas during the eighties and the nineties and has come to be best known by that self imposed title of "The Law West of the Pecos"—Judge Roy Bean. Many stories have been told of the Judge's deft manipulations of justice to serve to his own advantage. Perhaps the cleverest deal be ever made also made history in the world of sports. It is one story about the indomitable old judge that can be told for hard fact rather than legend -- here is the story.

Account of Coke Stevenson of Junction, who served as governor of Texas, a tall, quiet, 6-foot man from the hills of West Texas who was as rugged as those hills he loved so much. Here is his story. Mentions: Governor O'Daniel * H. D. Meister * Mrs. Meister and Mr. and Mrs. Bob Brown, Jr * Lockhart * Louise Gordon * George Montague * the Montague Ranch * an 8000-acre ranch 17 miles from Junction

Account of Gen. Persifer F. Smith's column in his inspection from Corpus Christi to El Paso and return in 1854 as told by Lieutenant Maury.

Some Texas Brands Were Puns

As part of their efforts to twoart the success of rustlers, old-time cattlemen were at times disposed to using the art of making good puns out of their own branding of cattle. For example J.H. Barwise made an easy pun with his Bar and two Y's, and W. G. Mulkey branded "MUL" followed by a key. This account details many more and gives excellent information regarding branding techniques of frontier cattlemen.

A Survey Of Indian Life In Texas

Account of the five distinct culture areas of the Indians that populated the state of Texas prior to the white man coming to settle. Includes maps and detailed descriptions of all the major and many of the minor tribes and cultures in the following regions: BRAZOS RIVER AREA, TEXAS COAST TRIBES, SOUTHWESTERN CULTURES IN

In the 1860's and 1870's not every community was fortunate enough to have a practicing physician, and sometimes in cases of serious illness a doctor had to be called from some town many miles away. Not many of these old time doctors had ever attended a medical school, but had picked up a little knowledge of medicine and surgery through reading medical books and from observation and practice, and were really good. One of these old-time medical doctors was V. G. Latham, a true pioneer physician - here is his story.

Pioneered In The Sonora Country

J. A. Witcher of Copperas Cove in Texas describes early times as a sheepherder in Sonora, Texas.

Opening Campaign Of The Texas Revolution

Graphic, eye-witness account by Colonel Johnson of the Anahuac campaign -- the first campaign that subsequently led to the Texas revolution.

Mr. Hunter in this account, offers some painful recollections of a certain bee hunting expedition, or rather hunting for wild honey made in 1886 in Menard county Texas. Mentions: Uncle Newt Rose * the Las Moras region * The account is a delightful glimpse into life in Menard county and of old-fashioned pioneer camping and food-gathering.

Mrs. Proctor Had A Narrow Escape

Account of Mrs. C. C. Proctor who was born in Spartenburg, S. C., May 9, 1839, and moved to the state of Mississippi at the of two years. In 1848 she moved to Burnet county, and then in 1857 she moved with the family to Travis county, where she was married in 1858 to G. W. Proctor. She endured a harrowing experience during a terrible Indian raid that nearly cost her life. The raid occurred in 1863 in Williamson county just west of Liberty hill, in the old Hopewell neighborhood, and more particularly that part of the community known as Dog Branch.

The heroism and bravery of the women on the Texas frontier has never been equaled by any other women in any part of the world. There are numerous incidents of their courage and fortitude under the most trying circumstances, but, the story of Mrs. Hattie Luster, a young widow, is one of the most thrilling and tragic adventures of all. Her tale begins at her home on the banks of Dry Creek, in Wise county, Texas in 1865. Here is her story.

A Killer Dons The Livery Of The Lord

Account of fiery preacher, Glenn Allen Brooks, a real old timer who killed two men in his 84th year and then went on to preach with great effect.

Article describes old encampment meeting at Paisano, at the highest elevated Point in Texas between Alpine and Marfa.

A poem by by Knowles Witcher Teel