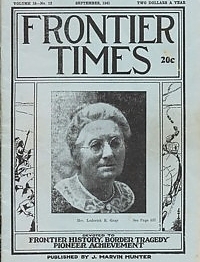 Commander Gordon Of The British Navy

From surveying the Red Sea, the east coast of Africa, the Sea of Marmora, and battling with slave traders, to the activities of a Texas ranchman is a long jump, but such were the experiences of Captain G. Keith Gordon, (account has old photo of him) who was the last survivor of the group of men who mapped the east coast of Africa and surveyed Constantinople harbor, against the express commands and under the imperial nose of the then all-powerful Sultan of Turkey. In 1881 he retired from the British Navy and came to the United States, and established the OWL ranch in Kimble county, Texas. Here is his story. NOTE: beginning in the October, 1941 issue, Frontier Times begins Captain Gordon's Memoirs, written about a year before he died, in which he tells of months spent in a life boat, how he hunted Captain Kidd's treasure, how he fought with negro slave traders, and relates incidents of thrilling adventures on the high seas as a midshipman, and as a commander of a sailing vessel in British service.

Fort Belknap On The Brazos

Excellent historical account of the old Fort and its early notable activities from the eye-witness view of James Buchanan Long, of Llano, Texas - a buffalo hunter.

Cache Of Gold Guarded By A Rattlesnake

Account of Pedro Hernandez and Longworth of San Antonio, and of the immense treasure of gold in an Uvalde Co. cave that was being made quite inaccessible due to the presence of what must have been an immense rattler. Mentions: the fabulous San Saba, or Lost Bowie Mine * The Broken Metate *

What Became Of Frank Jackson?

Account raises the question of what actually did become of Frank Jackson, longest surviving member of the Sam Bass gang, which had operated in Texas in the late 1870's. It is true that Jackson lived quietly in Arizona under an assumed name?

Account of Mrs. Loderick R. Gray at Lometa, Texas. Martha Nettie McFarlin (Mrs. Gray) was born in Llano county, December 11, 1858, and lived in the wilds of Llano county when only a few white folk had made permanent settlements—when the coming of darkness brought terrors. The anxious whine of dog, the sudden tinkling of a cowbell, the neighing of horses or the sound of running hoofs might mean that a burly redskin was stealthily slipping upon a settler's home. Such days were fraught with danger. Here is her story.

Lee Hall Gets His Men

Of notable Texas Ranger Captain, Lee Hall, it is said, "He did more to rid Texas of desperadoes and establish law and order than any other Texan ever had. He has made more bad men lay down their guns and delivered more desperadoes and outlaws into the custody of the courts and used his own gun less than any other officer in Texas." Here is his story.

John B. Omohundro, more familiarly known as "Texas Jack," was one of the daring frontier characters of the West - He was a sailor, soldier, Indian fighter and scout who ranked in fearlessness and quick action with any of the noted men of that day. Here is his story.

Account of Captain W. A. Miller of Henderson, Rusk county, Texas. Miller was born August 17, 1837, in Georgia, but came with his folks to Texas in 1838. He distinguished himself at the battles of Mansfield, Oak Hills, Pea Ridge and Prairie Grove. His first battle was a skirmish with the Yankees on Wilson's creek, near Springfield, Mo., in the summer of 1861, and at the time of Lee's surrender he and his company were on duty on the old San Gabriel River, just below Georgetown, Texas. Here is his story.

This account of one of the soldiers who fought the infamous battle of Mier again on Christmas Day, 1842, raises the mysterious destiny of the Irishman who fought nobly and was reportedly killed in the fight, but whose personage reappears in Texas history after some years.

Some Exploits Of Ben Thompson

Account of the character of enigmatic Ben Thompson, gunman, gambler, and city marshal of Austin, Texas by those who knew him personally.

Account of James Kerr, who was born near Danville, Ky., September 24th, 1790, removed with his father to St. Charles county, Missouri, in 1808, was a gallant soldier in the war of 1812-15 —a lieutenant under Capt. Nathan Boone—had been sheriff of St. Charles county, a representative in the legislature and then a senator. He had a wife, three little children and eight or ten favorite negro servants. With these he arrived at the mouth of the Brazos in February, 1825. Before the first of July his wife and two of his little children had died—the first in a camp, the others on the roadside. During July he reached the present site of Gonzales, accompanied by five or six single men and his servants. He erected cabins, laid out the town site as the capital of the future colony and began the survey of its lands. On the 1st or 2nd day of July, 1826, in his absence, Indians attacked his houses in the temporary absence of most of the inmates, killed one man and severely wounded another, robbed the establishment and then retired. Thereupon Maj. Kerr removed nearer the coast, to the Lavaca river, in what is now Jackson county, but continued his labors as surveyor of DeWitt's colony, and subsequently, also, as surveyor of the Mexican colony of De Leon, next below on the Guadalupe. To his laborious duties, in January, 1827, were added the entire superintendence of the affairs of Col. Ben R. Milam in his proposed Southwestern colony.