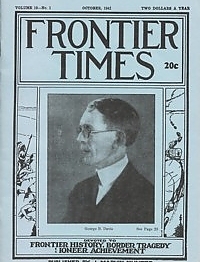 Account of Elias, a Syrian, who came to America as a camel-driver in the days when the "camel experiment," as it is sometimes called, was conceived by Jefferson Davis in about 1847 while he was with the American troops in Mexico. He believed, and rightly so, that if the United States would use camels in making long marches across the desert regions the hazards and suffering of the troops would be lessened and greater speed would be attained. The camel driver's son, Plutarco Elias Calles, grew up to be president of Mexico. Here is the story.

In several places throughout Ameriea's great Southland there yet remains in this modern age a few distinct districts, abounding in the traditions of the Old South, and which have had very few changes made during the past century. The "Mark Twain Country" at Hannibal, Missouri, Old Natches, Mississippi, which is the home of America's most famous "garden pilgrimage;" the Shenandoah Valley of Virginia and the `"Evangeline Country" of Louisiana, are all distinct historical regions, but the most distinctly different historical locality of the Old South lies in none other than the great Lone Star State of Texas, and which is usually simply described as the "Big Thicket." These piney woods of Deep East Texas, which are located in the Southeast Texas counties of Polk, San Jacinto, Tier, Jefferson, Hardin, Liberty, Chambers, and Harris, are the subject of this excellent story.

Adventures Of An Old Texas Cowboy

Mr. Huffmeyer, the subject of this article was born in Kendall county, Texas, on a farm on the Guadalupe River, November 25, 1855. He was left an orphan at 4 years of age and taken to Castroville and put in charge of a foster mother by the name of Christilles. He grew up to be a noted cowboy with a wide range of interesting experiences, some of which this account describe.

All In A Day's Work

Account of a dangerous prairie fire that occurred in the middle of July, 1890 along the South Canadian river in the Texas Panhandle where W. C. and Sam Isaacs were handling a string of steers for Mulalley and Forbes. Only an old cowboy would ever think of putting out a grass fire in this manner!

These Memoirs of Commander George Keith Gordon were written by him, and were furnished to Frontier Times by his widow, Mrs. Louisa Gordon. Just before he was fourteen years of age he joined the British Navy, and upon passing the entrance examination was appointed to His Majesty's Ship Britannia at Dartmouth, and after a year's stay there became a midshipman. He tells of his experiences on the sea for the next sixteen years in a most interesting manner in the following narrative. In 1881 he retired from the British Navy and came to the United States, and established the OWL ranch in Kimble county, Texas.

When the first white men entered New Mexico, being Spaniards, they then, as now, carried their religion with then. They enforced it on the native inhabitants by persuasion or with the sword.

An exploring party at that time always carried along a number of priests. When the commander saw a likely looking place for a mission he left one of them there. His job was to convert the Indians to the Catholic faith. To do so he only had to learn their language, convert them spiritually or kill them, build a mission, keep his scalp on his head and hold the country for the King of Spain and the Pope of Rome. If he failed his scalp adorned some of the many tepees of the Indian warriors.

This is a story of one of those priests named Saint Agnacio. He was noted for his kindness and medical ability and deciding that what is now the Quemado, New Mexico country, was a good place for a mission, he located and dedicated his life to the country and serving the wild inhabitants which consisted mainly of Indians.

Saint Agnacio had a pastorate to cover that would make a religious man of today faint. He preached to and doctored the Zuni's one hundred miles north. He built the first church on what is now Mangas Creek and cared for the Apaches to the west.

At that time just existing was a problem. For transportation he had his two legs. For sustenance he had his gun. To keep his scalp he had to live well hidden. He first built a rock cabin at Nutria Springs, two miles Southeast of what is now San Agnacio Springs.

The spring he drank from becamse the focus of many a strife between cattlemen and settlers, and was eventually lost - then discovered again - here is the story.

Texas ranchmen fear the ravages of the hybrid wolf-dog more than the native wolf, for the hybrid seems possessed of all of the cunning of the wolf and the fearlessness of the domesticated dog. Mr. F. C. Bates, retired from the ranch business and then hunted and killed hundreds of wolves and panthers along the Pecos river in the days when fences were scarce. He encountered predatory animals whose cunning and viciousness enabled them to cause great losses to ranchmen. The animals differed, some were very bad, but the worst of them was the killer whose sire was a valuable collie and whose dam was a huge lobo.

A Modest Next Door Hero

Account of one of the seventeen men who drew the black beans in the Mier Expedition's famous lottery of life and death and thus perished in that dreadful place. The story is about Edward E. Este, whose remains are buried on Monument Hill, near La Grange, Fayette county, Texas.

Brief account of one of the most tragic figures of Texas' glorious struggle for independence -- Colonel James W. Fannin who, with virtually all of his men, fell a victim to Mexican treachery following the battle of Colita on March 18, 1836. Years later a band of cowboys passed over the site of the massacre. The washing water from heavy rains had partially undone the soiled veneer under which was found the belt buckle of this great Texas hero.

A Horrible Murder In Burnet County

Account of the horrible murder of Benjamin McKeever in Burnet county, which was committed in 1872.

TO HUNT FOR WHITE INDIANS