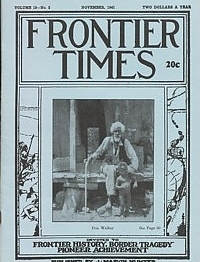 Who Invented The Bowie Knife?

The name "Bowie knife" naturally suggests that that famous weapon was first invented by James Bowie, one of the heroes who fell in the Alamo in 1836. But did he invent this knife? There are many conflicting reports to the contrary. The article addresses those conflicting reports and seeks to answer the dilemma. See also the follow-up article to this one in the December, 1941 Frontier Times for more information.

The Story Of Major Carter Braxton

Account of one of the many ex-Confederates who in disgust, left the United States and went to Mexico after the close of the War Between the States, hoping to enter the service of the Emperor Maximilian. Not finding anything to do in Mexico he drifted into Central America and on into South America. For many years he wandered around in various countries and never missed a chance to take part in any war he happened to meet on the way. Then having grown old and becoming weary of wars he headed north and reached the Rio Grande River, but did not cross it. He decided to spend the rest of his life in Mexico, and there he lived and died. Here is his story. Further Mentions: Judge Richard F. Burges of El Paso, Texas * C. P. Bearden of Rising Star, Texas * John W. Hunter *

This account is the story of Sam Houston's start to fame. He had been a rather wild boy often preferring the association of the Cherokee Indians near Marysville, Tennessee, to his studies in school. When the war of 1812 was under way a recruiting party passed through Marysville. The drums rolled, the colors paraded, the Sergeant gave his usual talk and Sam Houston stepped up and took a silver dollar from the drum head; that tokened his entry into the army. He was under age so he had to get the consent of his mother, who said "My son, take this musket and never disgrace it; for remember, I had rather all my sons should fill one honorable grave than that one of then should turn his back to save his life. Go and remember, too, that while the door of my cabin is open to brave men, it is eternally shut against cowards." Here is the story.

Account of old Don Walker, ex-slave in Bastrop county who lived to be more than one hundred years old. Known and respected throughout Bastrop county for honesty, fair dealing and true courtesy, he was expected to attend all white folks' get-to-gethers for old settlers. No good citizen within a radius of twenty-five miles of the community where he lived—eight miles from the small town of Paige—would have thought himself properly buried without the presence of Don Walker on the fringe of the congregation.

"How did you feel when the slaves were freed, Don?"

"No'm, Chile, I ain't feel no way. I stayed wid my Marster. Yas'm I did. My two brothers stayed in No'th Ca'-lina, but I followed my Marster, Mr. Harson Walker, to Texas. I said I was goin' to follow him long as I lived, and Missy, I followed him to the cemeter-r-y right dar in Bastrop."

"Yas'm, I seen de time befo' de wah, come January 1, when men like dem two (they were boys eleven and seventeen years old) would brang a thousand and fifteen hundred dollars. No'm, my Marster ain't nevah' sold none. 'What I think about freein' de slaves? Yas'm, dey was lots of dem dat need to be free; lots of dem dat did. Dem dat behaved needed a slack rope, but dem dat didn't behave needed de rope wo' out on tun. Yas'm, sho' did. T'want all had in de slave time. Some of dese niggabs now need slavery days."

"And then abruptly: "We shore need rain in dis country. De hongry animals need de grass and de water, but I don't predicks no weather. I take what de good Lord sends and gives thanks for it, for it say in de hook, 'He doeth all things well."

Account seeks to answer the question that was by the article in the September, 1941 Frontier Times as to what actually did become of Frank Jackson, longest surviving member of the Sam Bass gang, which had operated in Texas in the late 1870's. It is true that Jackson lived quietly in Arizona under an assumed name? This first-hand account by a man who was thirty years an officer and investigator in Texas and New Mexico seeks to shed light on the life of this notable outlaw.

The Penitentes Of New Mexico

Mysterious and bloody rituals of a paganized Catholic sect in New Mexico of the 1890’s. Because the death and blood-shedding of Christ is seen as insufficient, these bloody superstitionists were drawn into a dark bondage of self-flagellations, torture and even crucifixion. This account describes the bloody secrets of this dark cult.

The Fate Of J. L. Shepherd

J. L. Shepherd was a private of Company B., serving in the Mier Expedition under Captain William Mosby Eastland. Thomas Jefferson Green, in his work on this subject, states that Mr. Shepherd was a native of Alabama. He is shown to have been a resident of Bastrop in 1842, when he joined the army. He is one of those unfortunate 17 soldiers who drew a black bean and thus sealed his fate in death at the hands of the brutal Mexicans. Yet, his remains were not with the rest of the bones of these heroes when they were removed to Texas. What happened to J. L Shepherd in Mexico? Was he ever, in fact, brought before the firing squad as were the other who likewise drew the dreaded black bean? The object of this article is to throw light on these questions.

In The Land Of Poco Tiempo

Bowie's Battle On The Frio River

Account deals with what is known today as the old Spanish Silver Mine located at Silver Mine Pass, on Highway 83, about 20 miles north of Uvalde. Mentions: the divide between Dry and Main Frio * Robert Armstrong