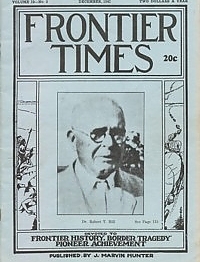 Rising eighty feet out of a great gusher oil field on a low hillock overlooking the city of Beaumont, Texas, is a monument unlike any other structure of its kind. The hillock is the site of the first oil gusher well in the world and the monument is built of ageless Texas granite, upon it is inscribed the great story of oil. To everyone interested in the oil industry it is more than a monument to petroleum. It is a tribute to oil enterprise and there are those who remember how the oil gusher roared in on Spindletop, just three miles south of Beaumont on that eventful day of January 10, 1901. This is the story of that great gusher.

By George I. Davis

Joseph J. Denton was born in Burleson county, Texas, July 1862, as an infant two years old moved to Kerr county with his parents, and spent 77 years of his long and useful life in this section.

If the complete history of education in Texas could be written, the name of William Leonidas Mayo would stand out as the greatest single benefactor of his time to thousands of young men and young women who desired an education but lacked money and sufficient schooling to enter college. Educational facilities, however, in the Texas that W. L. Mayo came to in 1887 were for the average youth quite meager. Thousands of children in rural communities had only a six-months school term each year; many of these schools had one teacher, and none of them offered a complete high school course. Even the lucky few out of this number whose parents were able to send to college found it difficult because they could not pass the entrance requirements. It was an unfortunate condition that badly needed a remedy. This story is about the key part that Professor Mayo played in that remedy.

There was a very decided prejudice on the part of many early Texans against everything which originated in or pertained to Mexico, hence there was a tendency to ignore the "Spanish parentage" of integral parts of our system of jurisprudence. Nevertheless, many of the foundational underpinnings of early Texas Jurisprudence, and much which remains to this day, finds its roots and origins in that heritage. Here is the story.

Mentions: the earlier codes of Spain, the Partidos and the Toro * the Germanic leaders compiled the "Les Romana Visigothoeum" or "Breviary of Alaric," which for two centuries was the recognized law of central southern Europe. At the beginning of the eighth century the "Breviary of Alaric" was superceded by the "Fuero Juzzo" written for the victorious Germans and the Spanish Romans. Thus it occurs that the basic law of all countries in America that were ever under Spanish rule was the ancient Visigothic code. "Fuero Juzzo," into which there had definitely been written the principle of the law of community property. * Gammel's Laws of Texas * the city of Leona Vicario * Jose Maria Viesca * Juan Antonio Padilla

Commander Gordon's eye-witness description of the slave-trading and slave hunting expeditions are remarkable:

"All this country, some twenty years previously, had been more or less settled with native tribes, each claiming the land for many miles around their villages, cultivating small patches of food stuff and fighting off the wild animals that threatened their existence. Now alas, it is empty, and the jungle has again taken possession of the clearings. For the Arab slave hunter has been working his dreadful trade. Now the slave hunter has to go further back to get his game.

So our Arab having journeyed for many months, reaches a country beyond the regular track and finds a native tribe to whom he gives presents, and asks leave to stay and rest before going further on his wanderings. Soon he finds that the tribe has neighbors with whom there is constant bickering and fighting. A few more presents, and long palavers, makes the tribe think their new friends have been sent to help them in their troubles with the neighbours. An agreement is now made between them to the effect that all the enemy caught are to be given to the Arab as his share of the booty, and the lard and villages are to be taken by the tribe. Of course the Arab's guns gain the day and the captives are gathered in by the score. Now comes out the chain, and men and women are being shackled in to start their long trek to the coast. If no chain was brought then yokes like the letter Y were cut, fastened over the shoulders, and several slaves tied together. Everything now apparently being ready for the march the Arab goes to the headman of the village and after a long talk accuses him of breaking his agreement and siezes him. This is the signal for his followers to follow suit with the surrounding natives, and soon the friendly tribe are also on the chain.Now comes the weary march to the coast. Food is scarce and the driving hard; sickness comes quickly, and the weak and old soon succumb. Knocked on the head and left to feed the hyenas is their fate. So the trail is marked with bleaching bones until the journey ends at the sea coast. Perhaps if they have been lucky one third of them may see the sea, but generally the loss is far greater than this. The hardest part of the work is now before them, to find a dhow to take them to Zanzibar, Pemba, or Muscat in Arabia, or where they think the best sale can be made.

But two English men-of-war are cruising tip and down the coast, each of them has four boats constantly moving about, no one knowing when and where they will turn up. Sometimes these pretend they are going to the next port north or south, but slip into the mangrove swamp instead, to wait for the slaves to come out at daylight with the morning land breeze. 2 to 3 a. m. is the general hour for loading the slaves, so as to be well out in the open, to gain the monsoon breeze, as early in the day as possible.

If there are many slaves, a hundred or more, a bamboo deck has been built for their accommodation. This deck is about three or four feet below the other deck, and the bamboo slats are two or three inches apart. Into this are crowded the wretched half-starved slaves, crouching with their chains on their knees, and here they stay until their captors think they are clear of all the boats and ships. Then every day they are brought up and fed, and the dead thrown overboard, but every evening down they go again. Seasickness is now added to all their other troubles, and the odor soon becomes unbearable. Perhaps the trip lasts a week, if to a near port, but if bound for Muscat, many weeks may elapse before their destination is reached, with added losses and always the risk of being caught on their way enroute.

"… we liberated the cook with orders to cook up all the rice on board with which to feed the slaves. Hauling them up for fresh air and food, and throwing the dead overboard was our next work. Here were more than a hundred and twenty human beings, with not a rag to bless themselves with, just as nature made them, skeletons almost, standing gazing at us, expecting every moment to be their last, for the owners had told them we were cannibals and the fire had been started to cook them. Soon we had enough cooked rice to give them all a feed, and as fast as the rice was done, we fed them. And it was not long before our efforts in this line began to show for their abdomens gave ample evidence."

Here is the biography of Dr. Robert T. Hill, world-famous Texas geologist prepared by Dr. Wm. E. Wrather. Born in Nashville, Tennessee, on August 11, 1858, his life span encompassed the most notable epoch in the social and economic development of the North American continent. His experience spanned the wide range from life in an obscure outpost on the edge of the frontier to a place of distinction in scientific circles both at home and abroad. It peculiarly symbolizes the American tradition that native ability fortified by perseverance and courage, can ultimately win the recognition to which it is justly entitled.

More About The Famous Bowie Knife

More about the controversy involving the true originator of the famous Bowie knife. See the November issue of Frontier Times for more.

Rare And Curious Bells From Everywhere

The Way Of The Transgressor

Old timers throughout West Texas well remember the operations of the Black Jack gang in the early 1890's There were many train holdups. in Texas, New Mexico and Arizona credited to Black Jack which he and his gang did not commit, but they were to blame for aplenty. This story is not to be a record of their depredations, only insofar as to show that it was Black Jack (Tom Ketchum) who started Ben Kilpatrick, a likeable Concho county boy, and Will Carver, another pretty good old country boy, who was raised in Bandera county, on the wild career which eventually ended in death for them.

Great Granddad, when the land was young,

Barred his door with a wagon tongue,

For the times were rough and the heathen mocked;

He said his prayers with his shotgun cocked.

Oh, he was a citizen tough and grim,

And fears no arm in the darkness deep;

For Great Granddad, he fought and won,

And tamed the land for his great grandson.

Great Granddad was a busy man;

He cooked his grub in a frying pan,

Picked his teeth with his hunting knife,

And wore the same suit all of his life.

But Great Grandson would starve on that.

Great Granddad was gaunt with toil,

Grimed and seamed with sun and soil.

But Great Grandson is fat and clean,

And rides down town in a limousine… (etc, etc)