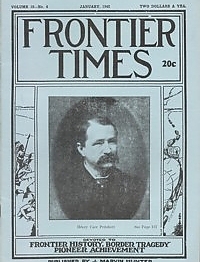 It used to be a saying that what a Texan can't mend with rawhide "ain't worth mending." Before "bobwire" became popular as twine, Texas according to another saying—was "held together with rawhide." It was well bound. Some people called the binding "Mexican Iron." It was an essential factor in the culture of the country. In the form of riatas, which took the place of chains, it had measured off the earliest Spanish grants of land, two horsemen with rawhide lariat stretched between them surveying in a lope and liberally counting the ropelengths. Like certain picturesque men, like droughts and northers, like animals with which the people associated, and like many other objects used and talked about by the public, rawhide became the subject of a cycle of folk yarns both grim and rollicky - it is the subject of this article.

The Garza Revolution In 1890

Account of the engagement of Texas Rangers who in December, 1891 fought revolutionary hopeful, Catarino Garza and his men, in a near-legendary incident on the Texas-Mexican border that became known as the Garza Revolution.

Some Texans We Would Not Forget

This article details the life and accomplishments of long-time Texas educator, Henry Carr Pritchett. Under him the Sam Houston Normal Institute became a recognized and influential factor in the educational progress of Texas.

In the annals of Texas there are recorded the names of many brave, generous and noble patriots who valorously labored to establish a free and independent government for that State from the Republic of Mexico. The pages of Texas history are not adorned with any name that is more glorious than that of Jose Antonio Navarro, who was born in San Antonio de Bexar, Province of Texas, February 27, 1795. A direct descendant of prominent citizens of Spain who had emigrated direct to Texas from the Island of Corsica, he inherited that pride of race, that dignity and culture and refinement; a high sense of personal honor that has always typified the noble of old Spain. His was a loyalty to Texas that was unswerving and glorious and the record of his service should always be remembered. This is his story.

Lee county, with an area of only 562 square miles, is one of the smaller counties of the state. It was organized April 14, 1874, and named for Gen. Robert E. Lee, at that time the hero of all Southerners. It was originally created from portions of the adjacent counties of Burleson, Washington, Fayette, Bastrop and Milam. The earliest record to be found of Lee county is in connection with the historic old San Antonio Road, the "artery of Texas civilization." Here is some excellent early history of the county.

Eli Terry & Sons, And Their Clocks

Account of long-time citizen of Marlin, Falls county, TX, Albert Boyd Curry who was born in Jasper county, near Garlandsville, Mississippi, March 6, 1858 and came to Texas in ox wagons soon after his father was discharged from the Confederate Army in 1865. Here is his story and of early times in Falls county.

The Activities Of M. Halff And Brother

Account of Mayer Halff and his younger brother, Solomon Halff, who journeyed from their home in Lauterburg, Alsace, France, to arrive in Galveston, Texas in the 1850's. These two brothers were from modest beginnings, but after relocating outside of San Antonio, were destined to take their places among the foremost ranch and cattle men of the State.