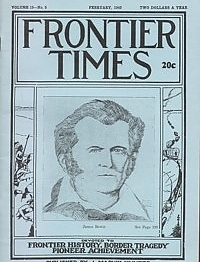 (Editor's Note.—We have read many good stories about "Calamity Jane" the most noted woman character of the Wild West but the following story by Colonel Harry S. Young is about the best we have run across. This story appeared in some magazine many years ago and was sent to Frontier Times by a South Dakota subscriber and we are taking the liberty to reprint it because of some of the facts it contains. Our regret is that we do not know the name of the magazine in which it appeared for we would like to give full credit.) NOTE: This is a first-hand account by a man who knew Calamity Jane personally.

Account of the life of Mrs. Coke R. Stevenson, wife of popular Texas Governor who died in the executive mansion in Austin on Saturday January 3rd, 1942.

Obit and brief history of Sam Reid Kone of San Marcos Texas who was born near San Marcos in the Stringtown community on May 9, 1855 and was one of Hays county's oldest citizens having spent all his life there with the exception of a short period spent in Waco.

A Thumbnail History Of Fayette County

Texas Has Many Court Houses

Texas has more courthouses than any other state not because more Texans take their disputes to judge and jury but because the state has more counties. The building denotes that within a definitely bounded area the people are sovereign. It is a symbol that they have the unqualified right to tax themselves for public improvements maintain order through the person of a sheriff established and conduct schools and other issues pertaining to local, civil government - Here is an account of the history, architecture and prominent place held by many Texas courthouses. Particularly focuses on the Falls county courthouse at Marlin Texas. Further Mentions: * J. R. Fitzpatrick * Brazos River * old Viesca * Hog Island * W. A. Rose M. W. G. M. * Sen. Tom Connally

The Bowie Brothers And Their Famous Knife

Account is written by a descendent of the Bowie family and is based upon the traditions of the family by word of mouth and contains an extensive history of the Bowies from the time of their entrance into this country from Scotland written by Matilda Manor Bowie.

Barbecue At Junction City 59 Years Ago

Account describes a massive event that occurred in August of 1893 at the ranch of Capt. Keith Gordon near Junction City in Kimble county, Texas. Ranchers and citizens of all the region attended.

Account describes the events of March 11, 1884, when notorious outlaw, gambler and lawman, Ben Thompson and John King Fisher were slain in the Jack Harris Vaudeville Theater at Commerce and Soledad streets in San Antonio. This double killing is probably the most famous in crime annals of old San Antonio.

Contemporaries Of Eli Terry The Clockmaker