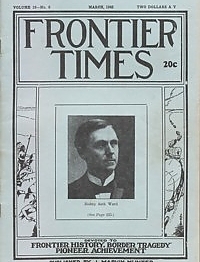 Additional information about Calamity Jane following the article in the previous month's issue of Frontier Times. Information is from letters that contain additional facts concerning the career of this remarkable frontier woman. The first of the letters was written by a man who had personal associations with her.

Some Texans We Should Not Forget

Samuel Goode Ward came to Texas in 1837. He built his home of logs in peon county near a crystal spring and a picturesque creek, and named it Springwood. As a farmer he was not very successful. But he was himself a highly educated man who had been a traveler and a soldier. He had a real library of well chosen books, and he kept in touch with the outside world through the best periodicals of the day. Seth Ward's mother was a member of the Methodist church, a prayerful Christian, who taught her boy from babyhood of the loving Father in Heaven who is never far from His children on earth. Thus in a Christian home, in an atmosphere of culture and refinement, was Seth Ward horn, on November 15, 1858. Seth Ward was preeminently a builder—a builder of churches and of houses for the churches to work in more efficiently; a builder of colleges and of buildings to add to their ability to serve. He put first the spiritual and intellectual building of the individual man, then the material building came as the outward working of the inward force. He was in deed and in truth a coworker with God in the making of men. Churches, schools, and colleges were to him just helpers in this making. Here is his story.

Account of Mrs. Clarinda Draper, long-time Llano county resident who was born on Jan. 6, 1838, near Nashville, Tenn., and three years later her father, Ephriam Choat, moved with his family to Texas, settling in what later became Fannin county. At the age of 16 years she was married to George Washington Draper, and they worked together at cattle raising for a number of years. It was customary for them to drive their stock to Palo Pinto county, fatten them and sell them to the Government for the Indians on the reservation. Here is her story.

Down In The Cross Timbers

By Worth S. Ray

Excellent and lengthy account describing the history, geography and culture of that region of Texas known as the Cross Timbers. This is a section of country beginning at Red River and continuing in a general southerly direction towards the Gulf of Mexico, located roughly in that stretch of country beginning on the East between Paris and Clarksville and extending Westward in some places as far as Jacksboro and including parts of Eastland and practically all of Palo Pinto counties, with an occasional area of comparatively level prairie country in between the different "prongs."

The financial panic of 1837 brought clockmaking almost to a standstill. But the demand for clocks had not abated with the general collapse of the period, and something was needed not only to meet the wants of the market, but to infuse new life into a waning and rather specialized industry. In using the word "cheap" to describe this new product, nothing derogatory is imputed. The American brass clock was a contrivance that has recorded time faithfully and well for a hundred years, and that with a little skilled restoring is qualified to function for another century or for an indeterminate period. Here is the story.

By A. J. Sowell (Continued Next Month)

The Camel Camp At Camp Verde

The camels were introduced into this country in 1856 to solve the problem of transportation in the arid sections of our southwest. They were distributed through Army posts in West Texas, but most were kept at Camp Verde, Texas. Congress appropriated $34,000 for the purchase of these camels and the next year forty more were bought. In 1857 a test was made to see how they compared with mules. Mr. Beale, the superintendent of wagon transportation, was in charge of this experiment between Fort Defiance, near Bonita Canyon, across such waterless deserts as the tornado del Muerto to El Paso, a distance of five hundred miles. The camels carried burdens of 700 pounds, part of which was forage for the mules which accompanied them. They finished the long trip much less jaded than the mules and lived principally by browsing, preferring brush to grass. Mr. Beale pronounced them a success and said that it was easier to manage a train of twenty camels than five mules. Here is the story.