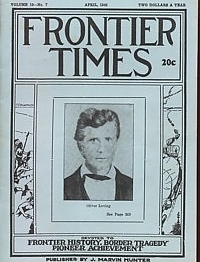 Some Of The Indian Troubles In Texas

Account details especially a raid upon the home of General Burleson and his son, Ed at the family's San Marcos Spring house in 1848.

Break-Up Of The Notorious Quantrill Gang

By Major Morris U. Lively, Chaptain U. S. Army.

In August, 1863, the notorious outlaw, William Quantrill, and those under his command, staged the outrage at Lawrence, Kansas, which has come to be known at "the Lawrence Massacre," in which many innocent persons were killed. United States cavalrymen were ordered in pursuit of the raiders, which was made by virtue of the famous "Order No. 11," by the terms of which the desperadoes were to be hunted and harassed constantly. In the late fall of 1863, Quantrill and his followers established a rendezvous some fifteen miles northwest of Sherman, Grayson county, Texas. It is at this point that the actual disintegration of the Quantrill gang began. Here is the story.

By A. J. Sowell (Continued from Last Month.)

Account describes an old letter, written by Texas Ranger Captain Ira Aten, to his aged brother and sisters, and is characteristic of that gallant old Ranger, who was one of the State's outstanding peace officers in the 1870's and 1880's.

The dust of the cattle trails out of Texas has long been buried in plowed fields and lost in fenced ranches. The push of progress has obliterated these famous landmarks of another day, but in the history of the cattle kingdom the men who rode up and down these trails will live. The most vital chapter in the saga of the range is that made by the Trail Drivers of Texas. To this resolute breed of men the hazards of mirage-haunted plains, the dangers of encounters with fierce, hard-riding plains Indians, and the difficulties of handling slow-moving herds of range cattle were but challenges to their ingenuity and determination. In meeting a desperate need with fortitude, the Trail Driver made himself an essential character in the development of the cattle industry. This account details the life of one of the most foremost and perhaps the first - Oliver Loving. In 1845, with his wife, their five children, and other members of his household, Oliver Loving left their home in Kentucky to come to Texas where his cattle-ranching success grew to legendary proportions.

The Egglestons; A Pioneer Bastrop Family

Bastrop county archives and family oral tradition recount the prominent place that the families of two brothers -- Stephen V. R. and Zina Eggleston had in the early history of Bastrop, Texas where they arrived from South Carolina, in 1927.

"Thermopylae had her messenger of defeat—the Alamo had none."

Who first used that famous phrase has been a question discussed for many years. When Judge W. A. Keeling, now of San Antonio, was Attorney General some years ago, he did some delving in the archives of the State as result of an inquiry on the subject from Senator W. E. Doyle of Teague. Research by Judge Keeling brought to light interesting information on the famous phrase - here is the story.

In The Valley Of The Shadow

Mrs. Eager was the first Anglo American born in San Antonio. She was born on Commerce St. near where the Aztec Theater now stands. She lives now at 434 South Alamo St., in the shadow of the metropolis which has replaced the quiet village of San Antonio de Bexar, Republic of Texas