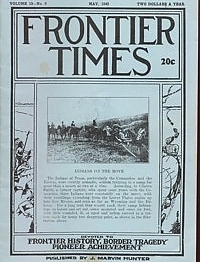 In the last issue of Frontier Times appeared an article, "Alamo Phrase Buried in Obscurity," which addressed the authorship of the famous phrase, "Thermopolae had its messenger of defeat—the Alamo had none." Various persons have been credited with having coined this immortal phrase, among them being Gail Borden, Edward Burleson, Tom Green, and others, and now comes another claimant for that honor in the person of Reuben Marmaduke Potter, eminent patriot of the days of the Republic. More light is thrown upon this subject by Mr. Louis Lenz of Shreveport, La , who sends in a Photostat copy of a portion of a pamphlet by Captain Reuben M. Potter. Here is the story.

Boyce House, now a prominent feature writer and radio commentator of Fort Worth, is the man who started "Rip," the Texas horned frog on his road to fame, and landed him on the front page of nearly every paper in the United States, back in 1928. This is the account of House and the famous frog by R. K. Phillips of the Weatherford (Texas) Democrat.

By A. J. Sowell (Continued from Last Month.)

In 1870-71 the Indians were very numerous and hostile on the Texas frontier, and a call was made by the Governor for several companies of volunteers to go on a campaign against them. There was an immense scope of country to protect, stretching from the Rio Grande to Red River. The Indians were more numerous in the northwestern part of the State, and committed many depredations under the notorious leaders, Big Tree, Satanta, Sittanka, and others. This account especially deals with the conditions of the Texas border at that time, especially in the northwest, and relates incidents of Indian warfare as recalled by old settlers in that region. Account includes detailed record of the brutal Indian attack on the poor Keenon family.

Notable Texans I Have Known

The account describes individuals that have always had the interests of Texas foremost in their lives and will always be the noblest of Texans. They have kept the sparks of tradition and romance burning in the hearts of all loyal Texans by their untiring, unceasing efforts to preserve a realization of the historical heritage of the people of Texas.

The growing, sale and the manufacture of cotton into cloth, the varied use of the by-products of cotton, is such an important factor of the lives of such a vast number of people that the story of the effort to further the commercial production of cotton in Guadalupe county is an interesting one. W. R. Posey, of Seguin, recalls in this article, his grandmother's account of the work of her husband, Ben Posey, in erecting the first cotton gin in Guadalupe county:

Mentions: the Posey family came to Texas from Virginia * he located on York's Creek on the line between Guadalupe and Comal counties in 1852 or 1853 * Rogue's Hollow

Author of this article, Clifton Seymour Stuart, was an old time telegraph operator in Texas, and spent several years in Marshall and Dallas, and he wrote many interesting stories of early railroad life, which were published in Frontier Times. Here is another of his fine offerings from his early Texas life experiences.

As Told to His Son, Roy Holt.

Account of Jeff Holt, who was born in Erath county, Texas, near Granbury, May 17, 1862. He spent most of his years in Coleman county, Texas and offers excellent detailed glimpses into life in early days there. This account offers some rich and rare early Coleman county history and genealogy.

"It is pleasant to look backwards sometimes and recall amusing incidents that occurred in the days of our youth. In the years that I have lived I have had many varied experiences, some strange, some tragic, some blood-curdling, some sorrowful, some humorous and delightful. Through all these years there has been enough happiness and sunshine to outweigh whatever sorrows and misfortune that has come to me."

"My happy childhood days were spent at Mason and Menardville, and I have a vivid recollection of many things that occurred, particularly at Mason,, which, to the reader, may not be interesting, but to me they are treasures and souvenirs of my boy-hood that will never be forgotten."

"One of the humorous, yet pathetic, incidents that I recall happened at Mason in 1892. The Baptist congregation had erected a new church building on High Street, just across from D. Doole's store, and shortly after its completion a protracted meeting was held there, the services being conducted each night for about two weeks. Rev. C. A. Mangham conducted the revival. A family by the name of Harris had just moved to Mason from Hunt or Hopkins county. Mr. Harris was a lawyer, and had three sons one of the sons, Charlie Harris, was also a lawyer, and a little later this young man was elected county attorney. Charlie Harris was a fine looking young fellow, always went well dressed and, like his brothers, was very popular with the girls…"