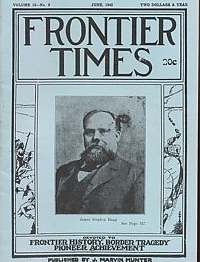 James Stephen Hogg (Jim Hogg as he was affectionately called), loved Texas as few men have. He was born in Texas, he grew to manhood close to the good Texas earth, and he was the the first native son ever to become her governor. He had been Attorney-General four years from 1887 to 1891, after which he had moved to the governorship for a four-year stay. In 1895 he went into private law practice in partnership with Judge James H. Robertson in Austin. Here is his story.

By J. Marvin Hunter Excellent account of W. J. Wilkinson, or "Uncle Jack" Wilkinson, as he was better known, successful stockman and one of the substantial citizens of Menard county in the early days. He was born in Mississippi in 1833, and died in Menard county, Texas, about 1918, at the ripe old age of 86 years. Account describes his setbacks and ultimately success at cattle-ranching and then focuses on a terrifying incident wherein he ended up showing mercy to a Comanche warrior and was repaid in like manner in a desperate situation a few months later.

By A. J. Sowellin 1870-71 the Indians were very numerous and hostile on the Texas frontier, and a call was made by the Governor for several companies of volunteers to go on a campaign against them. There was an immense scope of country to protect, stretching from the Rio Grande to Red River. The Indians were more numerous in the northwestern part of the State, and committed many depredations under the notorious leaders, Big Tree, Satanta, Sittanka, and others. This account especially deals with the conditions of the Texas border at that time, especially in the northwest, and relates incidents of Indian warfare as recalled by old settlers in that region. (Continued from Last Month.)

By J. Marvin Hunter Account of the old gatherings and barbecues the people of Bandera County which was noted for its grand barbecues used to enjoy.

The Murder Of Mr. And Mrs. Riggs

In 1910 B. F. Gholson, then living at Evant, Texas, furnished the following account of the murder of Mr. and Mrs. Riggs and a Mr. Pierce by Indians in Bell county in the spring of 1859. The author lived about six miles from where these murders occurred and along with a number of other local citizens hurried forward to join in pursuit of the Indians. This is the sad account.

Texas In Wartime Through British Eyes

By T. C. Richatrdsott Account of the diary of Lieutenant-Colonel Fremantle, of Her Brittonic Majesty's Coldstream Guards, April 2, 1863. The fastidious young officer of an aristocratic regiment was entering upon a three months tour of the then Confederate States, during which he acquired a liberal education in the (to him) strange ways of Texans and other Southerners. Colonel Fremantle explains in his foreword that his first attitude toward the American civil war was, in common with most of his countrymen, that of indifference, but with a slight bias in favor of the North on account of his dislike of slavery. "But soon sentiment of great admiration for the gallantry and determination of the Southerners, together with the unhappy contrast afforded by the foolish, bullying conduct of the Northerners, caused a, complete revulsion of my feelings" whereupon he determined to visit America and "see something of this wonderful struggle." Incidents of his stay in Texas are related in this story without reference to dates and sometimes out of their chronological order, with a view of portraying the scene as it appeared to Colonel Fremantle in April, 1863.

Account describes the event of a cowboy employed on one of the first ranches established in Shackelford county who ventured out unarmed one day to brand a young calf in a bend of the creek near camp. He had accomplished his mission and was mounting his horse to return, when a single Indian fired upon him from the shelter of a neighboring bush. Without giving the savage time to reload his piece, this cowboy, charged down upon him with a yell, forced him out upon the open prairie, and with a deft cast of his lariat encircled his body and dragged him, helpless and silent, back to the branding fire. As coolly and deliberately as though he was going about his everyday business the Texan replaced the brand in the fire, brought it to the proper heat, and applied it with quiet precision to the most prominent part of his enemy's anatomy; then stooped and, with the Indian's own knife, added the ranch ear-mark as corroborative evidence of the authenticity of the brand. Then he loosened the rope and kicked the Indian until he sullenly arose to his feet.

"STAR OF THE WILDERNESS."