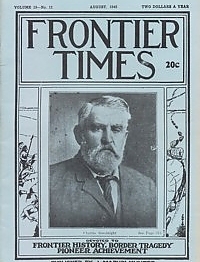 Frontier Times has published during the past eighteen years several accounts of the great battle between Kickapoo Indians and Texas frontiersmen on Dove Creek, in 1865. Each account we have published was given by actual participants in the battle and each one brings out additional facts. The following account was written in 1926 by John C. Cureton of Los Angeles, California. He was but fourteen years of age when the battle occurred and he was engaged in it under the authority of his famous father, Captain J. J. (Jack) Cureton. Here is his story.

The name of Charles Goodnight stands head and shoulders above that of any other pioneer cowman in Texas, and he is justly entitled to the distinction by reason of nearly three-quarters of a century of successful experience in the cow business. Charles Goodnight was born in Macoupin county, Illinois, March 5, 1836, and died in 1930. In 1847 the family moved to Palo Pinto county, then on the extreme frontier. In 1856 Mr. Goodnight started on a overland trip to California, accompanied by J. W. Sheek, a young man of his own age. Their outfit consisted of a bull team and wagon and three horses, and they bore steadily westward until they reached the San Saba river, where, deciding that Texas was large enough to supply an ample field for their energy, they turned back. At the crossing of the Brazos they encountered a cattleman who proposed letting them have a small herd to handle on the shares, and a bargain was soon arranged. The young men were to take charge of the cattle—430 in number. This was Goodnight's entry into what would be his life-long love and his field of consummate success. This is his story.

In 1870-71 the Indians were very numerous and hostile on the Texas frontier, and a call was made by the Governor for several companies of volunteers to go on a campaign against them. There was an immense scope of country to protect, stretching from the Rio Grande to Red River. The Indians were more numerous in the northwestern part of the State, and committed many depredations under the notorious leaders, Big Tree, Satanta, Sittanka, and others. This account especially deals with the conditions of the Texas border at that time, especially in the northwest, and relates incidents of Indian warfare as recalled by old settlers in that region. (Continued from Last Month.)

The Southwest In The World Of Literature

The Southwest offers many opportunities for many things—and important is its rise to prominence in the field of literature. The Southwest has been fortunate in being able to draw from many sources for book material: pioneers and cowboys; the permeating Mexican elements; the Negroes; the early adventuring Spanish and French—all these in addition to the shared Anglo-Saxon background of other regions.

Account of Mr. Alex Neal, an old time cow hand, who in this account, describes early days in Hamilton, San Saba, and Kimble counties, and is quite familiar with many of the tragedies that occurred in those days on the frontier. He was born near Hexberry, Cooke county, Texas, March 3, 1870, the son of Mr. and Mrs. Dan Neal. His mother's maiden name was Elida Russell, and she was married to Dan Neal in Georgia. The family moved to Texas and settled in Cooke county, where Alex Neal was born.

A Tenderfoot Joins The Texas Rangers

The reputation of the Sieker brothers, L. P. and Ed Sieker, as gallant Texas Rangers, is well known throughout Western Texas, these brothers having lived at Menardville for many years. L. P. Sieker served for quite awhile as Adjuant General of Texas. Both saw active service on the frontier in the 1870's. Their younger brother, Tom Sieker, came out from Baltimore, Maryland, in 1876, to join the company of Texas Rangers in which his two brothers were serving, and in the following narrative, which was written by W. S. Adair, he relates some of the adventures he experienced in coming to West Texas as a tenderfoot.