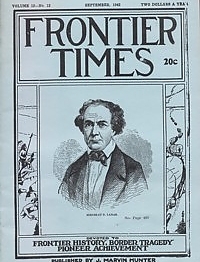 Mirabeau B. Lamar, Patron Of Education

To Mirabeau B. Lamar, more than any other one man, is Texas indebted for the foundations of its present educational system. He it was, as president of the Republic of Texas, who inspired its Congress to set aside an immense area of the public lands for a great University and a smaller allotment to each county for primary schools—an action that was perpetuated by Texas as a State. His is that immortal quotation : "A cultivated mind is the guardian genius of domocracy."

The Alamo And La Bahia At San Jacinto

The Story Of An Ill-Fated Expedition

Written by John Warren Hunter in 1910.

In the fall of 1866 Jacob Schnively, an enthusiast in mine prospecting, and Colonel William C. Dalrymple of Williamson county, created a stir of excitement among the people along the then western and northwestern border, over the alleged discovery of a fabulously rich gold mine in the mountains on the Rio Grande. This precipitated an expedition of ten men to investigate and participate in the excavation of the riches. The expedition was a tremendous failure - one of the participants, W. H. (Bud) Robinson, here offers the details.

The Pony Express In American History

One of the most colorful phases of American history is that of the Pony Express. This excellent account traces its beginnings in 1859 when the Pony Express became a nation-wide public service.

Dodging The Grand Jury In Mason

When A Herd Of Longhorns Got Homesick

Account describes a home-coming herd of 500 longhorn cattle that traveled across a wilderness of country in an almost direct line for 200 miles toward the Santa Rosa Mountains where they were raised, and were within a short distance of their native range when rounded up. Also includes an excellent historical account of Texas forefather of the cattle industry, Dr. Johnson Hunter who started in the cattle business with two cows and a bull on his ranch near Morgan's Point in 1822. At the time of his death in1855, Dr. Hunter's herds included 11,000 cattle.

The Gratitude Of An Indian

O. T. Word, for many years a ranch-man in the Ozona-Sonora country in West Texas, relates in this account, an amusing experience he had, which emphasized that an Indian never forgets a favor. Mr. Word was raised on Caddo Creek in Hunt county, Texas, where he grew to manhood. When he was about grown he visited his uncle, Captain Buck Barry, one of the most noted Indian fighters of the early days, and whose home was in Bosque county. At the time of his visit, Mr. Word was given occasion to spare the life of a captive Tonkaway. This same Indian recognized Mr. Word years later and expressed his gratitude in behalf of Word's former kindness in a very amazing way - one which Word had to humbly decline. Here is the story.

Further Mentions: U. T. Orville * the headwaters of the San Saba * Indian Territory, not far from Fort Sill *

In 1835, John Webster, a citizen of what is now West Virginia, came to Texas with his family, consisting of his wife and two children, a boy about 10 years old, and a daughter about three years, and several negro slaves. They made their home below Austin, on the Colorado River, or about the Hornsby Bend. Mr. Webster being a man of some means bought some of the cheap lands in different parts of the state. One of these tracts of land was in Burnet county, and near the village of Strickland on the north fork of the San Gabriel. He decided to make his home on the Burnet county tract of land, and gathered a party of men to assist him in moving, and erecting buildings and also as a protection for himself and family from the Comanche and other hostile Indians. This party consisted of Mr. Webster, one negro man and 11 other men, and Webster's family. The party was brutally attacked and the women were taken captive by Indians until they escaped two years later. Here is the whole story.

The Old Town Of Brackettville

One of the few remaining Oaks between the new Texas and the Texas that once was is the town of Brackettville, snuggled down among rolling hills in the southwest part of the State. Brackettville is near the center of Kinney county. At one time it was the most important town in that vast section of the uncharted Southwest Texas.

The Runnels family of Texas has a proud history. Harmon Runnels fought in the Revolutionary War. One of his sons became Governor of Mississippi, and later won such distinction in Texas that a Legislature thought it befitting to name a county in his honor. A grandson became the chief executive of the Lone Star State, and other of his descendants have become outstanding citizens of Texas. Here is the story of the one who governed Texas during the late 1850's.