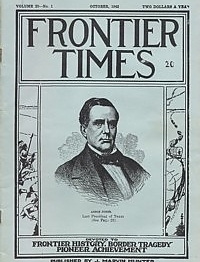 The Cowboy Has His Imitators

A Page From Unwritten History

Account of Southern patriot and soldier, Sam Davis, who while captive in a Union prisoner of war camp, was induced to betrayal of his captain and fellow confederate soldiers, which inducement he with manly fortitude resisted unto death. Mentions: Arnold von Winkelried * Sempach * Mrs. Arthur Burum of Conroe *

Account of T. M. Thompson, a Dallas citizen who relates some of his experiences in Arizona when that state was "wild and woolly", full of savage Apaches, Tombstone counted 4 or 5 killings a day, and then goes on to relate earliest days in Dallas.

And Davy Crockett Came To Texas

Davy Crockett was one of the most astounding personages of the gaudy, noisy, hot-tempered, pistol-toting era of Andrew Jackson and Martin Van Buren. Here is an excellent account of his settling into Texas life and history. Mentions: Chester T. Crowell * Colonel Alexander * John Quincy Adams * Martin Van Buren *

The following is taken from the diary of Major J. M. McCullock, while in prison at Camp Ford, Texas, 1864. This prisoners' camp was situated about three miles east of Tyler, in Smith county, Texas. McCullock remained in the prison camp for 13 months until the end of the war. He recounts the dreadful conditions of his stay there.

The End Of The Republic Of Texas

Account of the events and circumstances that led up to the Republic of Texas becoming a State in the Union of the United States by the free choice of the people of Texas, and not from any apprehension of an inability to maintain Independence as a separate nation.

The Lost Apache Tribe In Mexico

Two mysteries of the old Southwest—the capture of a white boy and the disappearance of an Indian killer —may be linked with the fantastic history of a renegade Apache band living in the isolated Sierra Madre Mountains of Mexico, Dr. Helge Ingstad, Norwegian ethnologist, spent three months in quest of the "lost" remnants of Geronimo's warlike tribe - a band which chose exile in the forbidding peaks and canyons along the Sonora-Chihuahua border rather than surrender with their chief. Here is the story.

Real county, which is smugly tucked into the heart of the "Hill" country of Texas' vast domain with a population averaging less than four persons to each of its 619 square miles, made pioneer Texas history. Goats feed among the brush and liveoaks in the canyons and on rocky hillsides where a century ago Apache, Comanche and Lipan Indians stalked the early settlers. The crumbling ruins of pioneer log homes—sagging stone chimneys and dilapidated foundations —hidden away in the canyons off the beaten trails mutely tell a colorful story of the dangerous epoch represented by the attempts of the first settlers to tame the country. Adjacent to Camp Wood the historic old mission, San Lorenzo de la Santa Cruz, may be traced in broken foundation stones and the debris of adobe brick. There is evidence that many buildings at one time stood within the walled grounds, and a number of pits excavated in recent times suggest the activity of souvenir seekers and, perhaps, treasure hunters. Through the years the quarried stone has been removed and used in other buildings throughout the canyon, and nearly all the chimneys for miles around contain stone from the abandoned mission. The mission was established at the request of the Lipan Indians because the predatory Comanches were warring upon them as well as upon other less ferocious tribes. The Lipan chief, Cabezon, at El Canon on the east bank of the East Fork of the Nueees River in what is now Real county, sought protection of the Spanish missionaries and in due time the mission station was built. Here is the story.

Interesting facts and experiences related to the roadrunner, or chaparral bird—the paisano, as people along and up from that border call him. Also details the effect of these unique birds to local rattlesnakes populations in the area.