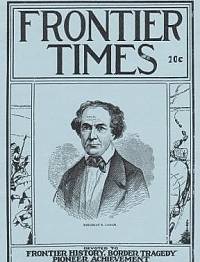 Sketch of General Mirabeau B. Lamar

Account of the life of Mirabeau B. Lamar, the third Presi­dent of Texas, who was barn in Jefferson county, Georgia, the 16th of August, 1798. His ancestors were French Huguenots, who fled from their na­tive land after the revocation of the Edict of Nantz, in 1685, and settled in Maryland, South Carolina, and Geor­gia. He was a consummate Texian soldier, statesman and patriot. Here is his story.

When Onions Saved My Life

The United States Ninety-four Years Ago

Reflections and comparisons from old Morse's School Geography, printed in 1849.

The following article, written by C. C. Fulton, was copied from The Rockport Transcript, published March 28, 1874, and gives our readers a good account of cattle raising and meat-packing house activities on the Texas coast in that early day.

Nettie Walton Watson.
Seek not for riches that fade as a shadow...

“Wallace Franks, who for the past eight years has been the efficient caretaker of the beautiful South Bluff Park in Corpus Christi, recently told us of how numerous rattlesnakes were on the Stockton & Walton ranch, 12 miles southwest of Corpus Christi, when he was foreman on that ranch some years ago. The ranch was owned by Hugh Stockton and Wallace Walton, and at the time he began his duties as foreman there in 1910 about 1400 acres were planted in cotton. A short time later the cotton acreage was increased to about 2,000 acres. Most of the laborers employed on the ranch were Mexicans, with several negroes, and a few white men. The cotton rows were one mile long, and it required a great many hands to culti­vate and pick the cotton, sometimes three-quarters to a bale to the acre being gathered. Rattlesnakes were everywhere in the cotton fields, and Mr. Franks says he killed...”

Praise God, and pass the Peace Plan, On the sea and on the land,
When they have taken the last stand...