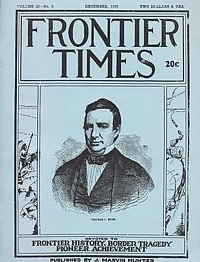 Thomas Jefferson Rusk was born December 5, 1808, iii the Pendleton, District of South Carolina. He was a distinguished soldier and statesman, who was involved with almost every important event connected with the progress of Texas from the condition of an oppressed colony of Mexico to her present proud position among the sovereign States of the American Union. Here is his story.

Hospitality, Texas style, is a combination of that gracious and charming article of the Old South and the hale and hearty Western variety, and something else besides. A real ex-ample is encountered at "Watsonia." home of Mr. and Mrs. Harry H. Watson of Corpus Christi. "Watsonia" overlooks the Corpus Christi Bay, and a guest once declared the site was the most beautiful spot in Texas for a home. Here is the story.

Beginning Of The Methodist Church In Texas

Account describes the earliest origins and subsequent developments of the Methodists in Texas.

Treaty Made With Indian Tribes In 1844

A treaty of peace, friendship and commerce was wade between the Republic of Texas and the Comanche, Keechi, Waco, Caddo, Anadahkah, Souie, Delaware, Shawnee. Cherokee, Lipan and Tahuahkarro tribes of Indians on October 9, 1844, at Council Grove on Tahwaccaro Creek, seven miles northeast of the present city of Waco. This story recounts the full details of the 22 articles of that historic event, and of its great failure.

Excellent article from The Texas Almanac for 1857 which gives a description of Bandera county at that time.

"BANDERA is bordered on the north by Kerr county; east by Comal and Bexar; south by Medina and Uvalde; west by the Bexar unorganized territory. The Medina rises in its eastern side, and there are a number of smaller creeks in its southwestern corner. The surface is hilly. There is a white population of 136; no returns in regard to negroes. There are 347 head of cattle, valued at $4,000; 17 head of horses, valued at $610. Total, $17,866. About half the surface is supplied with live oak, cedar and elm. The only fruit so far…"

From the Texas Almanac for 1858, published by Richardson & Co., Galveston, we take the following article, which is an extract from an old manuscript, "A Review of Kennedy's History of Texas," and which gives the correct term that should be applied to citizens of Texas.