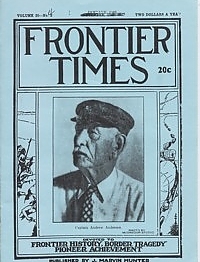 Account of Captain Andrew Anderson, who offers his recollection of early day events and many interesting incidents in the history of the Texas coast country that happened when he was a boy, especially does he remember the bombardment of Corpus Christi by Federal gunboats, August 16th and 18th, 1862, and later he was present when Captain Kittridge, the Federal commander, was captured by a party of Confederates on Flour Bluff, several miles from the city. He was just a twelve-year-old boy at the time, and knew Captain Kittridge. It is his picture on this month's front cover and here is his story.

As the years pass fame and credit that was his due is now coming to "Big Foot" Wallace, the noted Texas Ranger and frontier fighter. A big Liberty cargo ship has been named for him. On Saturday, December 12, 1942, this great ship was launched at Houston, Texas, with appropriate ceremonies. Here is the story.

"Every citizen of the United States should be the warm friend, the unceasing advocate, and the bold defender of African slavery as it exists in the Southern States of the Union. Why?" - This account seeks to answer the question posed.

Account of the closing of the last frontier fort (Fort Chadbourne) ending an important era in the history of Texas and of the frontier.

Account of Pat Conway, native of Ireland, and San Angelo's last soldier of old Fort Concho. Born in County Clare, Ireland, Jan. 17, 1852, Mr. Conway came to the United States in 1874. He enlisted in the Army at Lowell, Mass., in 1883 and was assigned to the Southwest His first station was Fort Ringgold on the Rio Grande. As a soldier in the early days of West Texas, Mr. Conway served at both Fort Concho in San Angelo and old Fort Davis in the Davis Mountains. He was transferred to Fort Concho in 1888 from Fort Brown at Brownsville. Here is his story and the story of early times in San Angelo.