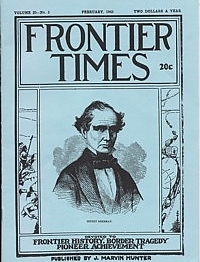 There are none among those who figured in the Texas revolution that have displayed more devotion to the general weal, more gallantry on the battlefield, or less of selfish ambition in the political arena where demagogues delight to flourish, than General Sidney Sherman. General Sidney Sherman died in Galveston in 1873. Here is his story.

Among the many outrages committed by Comanche Indians in Southwest Texas during frontier days, none was more horrible than that perpetrated in Legion Valley, Llano county, in 1867 or 1868. This account of the horrible Legion Valley massacre was written by John C. Oatman of Llano, one of the three survivors of the band of settlers that went in pursuit of the Indians. This account is the only first-hand version known to exist.

Happy Days On The Frontier

Clay Allison Of The Washita

Clay Allison is not to be classed as a gun man, either on the side of the law, like Wild Bill Hickok, or outside of the law, like John Wesley Hardin. Yet he was emphatically a man of guns: He was not a bad man in the sense that that term has come to have. Yet he seems to have killed more men than many a man made his reputation on. Charlie Siringo credits him with having killed 18; others say he killed only 9 or 10. All seem to agree that everybody he killed deserved killing. Here is his story.

FATE OF THE McCOMAS FAMILY

More information on the article pertaining to 'The Last Apache Tribe in Mexico' in the October, 1942 issue of Frontier Times, and particularly on the slaying of Judge McComas and his family.