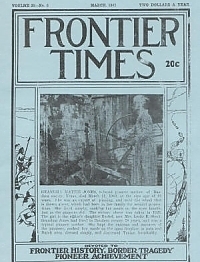 Robbery of the Union Pacific

In September, 1877, a Union Pacific train was held up and robbed of sixty thousand dollars in gold at Big Springs, Nebraska, by Joel Collins, Bill Heffridge, Tom Nixon, Jim Berry, Jack Davis and Sam Bass. This was one of the most sensational train robberies of that day and time, and created a great deal of excitement all over the country. Here is the story.

Bigfoot Wallace was a noted frontiersman, an efficient Ranger, a soldier of the Mier Expedition and the Mexican War, a Ranger captain, and a mail carrier from San Antonio to El Paso in the early 1850s, when it took a brave man to hold such a post. A great deal has been written about his more adventurous life, but little has been said about his activities as a free grass rancher on vacant lands of the Southwest frontier; first on the Medina from 1840 until 1857; then on the Chicon until 1873, and lastly on the San Miguel where barbed wire "played hell" with his range, and from which he was evicted by a land loan corporation. Here are the details on this part of the good man's life.

When Barbed Wire Came to Texas

J. F. Glidden, a farmer of DeKalb Illinois, invented barbed wire in 1873, but it did not come into general use in Texas until the late 1870s and early 1880s, to cause a great deal of trouble and some bloodshed. Previous to the introduction of barbed wire the country was all open and the range was free. Much of the domain was State-owned, and small stock-raisers could range their herds on the free grass, but with the coming of barbed wire landowners began fencing the range, including in their fencing much State-owned land, thus crowding out smaller stockmen, who owned no land. Naturally this was resented by the smaller fellows, and as a result fence-cutting at once became a menace to the land owners, and brought on what was known as the " Fence.-Cutters War." Here is the story.

The Violin of Perote

The "Violin of Perote," rests in a glass case in the State Library at the Capitol, and has a glamorous history. It had a stirring part in Texas' battle for liberty. During the Meir expedition, it was made by a prisoner from soup-bones, a stolen file and bits of wood left in the carpenter shop by the worker who built the chair of state for Santa Anna.

Account of Mrs. Mattie Southward Jones who was born at Georgetown, Texas, January 24, 1852. She came to Bandera county in 1865, after the close of the Civil War, and on July 2; 1868, was married to Sam Jones, the county's Chief Justice, Henry Stevens, performing the ceremony. They lived on a ranch north of Bandera for soma years, where Mr. Jones died in 1876, leaving her with five small children. These children she raised to manhood and womanhood, and they went on to occupy high stations in life, and reflect the gentle influence exerted by that noble mother in rearing them to be useful men and women.

Story of the Old Butterfield Trail

Story of the stage line established in 1848, which began at St. Louis and terminated in San Francisco.

A Brilliant Mind That Cracked

Account of a brilliant Waco lawyer who soured his own reputation by his bitter statements about public acceptance at the end of his life - a very sad account.

"To all young men: If you want to succeed as a lawyer disregard entirely the admonitions of your forebears—be a cross between a politician, a preacher and a pawnbroker—and with the mercy of God you may survive—but my advice to all men is to be honest, and for God's sake stop trying to be an admonitor of the public weal. They don't want it and you are a fool for thrusting it upon them! Be a worker ! Let the white collar fellows carry the burden. Don't be a damn fool! Don't try to help anyone, and don't think the public will appreciate your efforts. Be sane and selfish. I'm through! The world will judge me harshly—but I've tried hard and failed. My religion teaches me that men are fools. I've 'tried to do the right thing, but what's the use? Everybody expects a prominent man to live up to his position—more bull and...”

A SERMON IN A MINING CAMP.

Mrs. Lydia Buell, of Pipe Creek, Texas, offers record of a sermon delivered by a preacher in a mining camp :

"Brothers and Sisters: I come to say good-bye. I don't believe God love's this church, because none of you ever die. I don't think you love each other, because I never marry any of you. I don't think you love me, because you have not paid me my salary. Your donations are mouldy fruit and wormy apples, and `by their. fruit ye shall know them.' Brothers, I am going to a better place. I have been called to be chaplain of the penitentiary. Where I go ye cannot cone. I go to prepare a place for you, and `may the Lord have mercy on your souls,'"