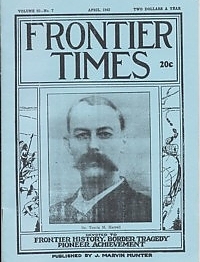 One character on the Texas frontier who has never been given the full credit and praise that is his due, is the old family physician, who unselfishly and untiringly devoted his time and talents to the sick and the ailing. The night was never too dark or the weather too disagreeable to hold him back when there was an opportunity to save a life or relieve suffering, and often he rode horseback long distances, carrying his "pill bags" with him to reach his patients. Besides being a physician he was also a surgeon, and could saw off a leg or an arm, probe for and remove a bullet, set fractured limbs, and do just as good and oftentimes a better job than modern surgery can perform. Dr. Travis Mangum Harrell, was one of those fine old Texians who had practiced medicine for nearly half a century. He was born in San Saba county, Texas, on Simpson's Creek, two miles east of the town of San Saba, February 8, 1862. He and Mrs. Harrell moved to Round Rock in 1896, and be took up the practice of his profession within one mile of the first school he ever attended, and there they remained for twenty-six years. Dr. Harrell became one of the outstanding physicians in that region, and made hundreds of friends. In 1922 Dr. and Mrs. Harrell moved to Corpus Christi. This is his story.

The Fight At Live Oak Mott

There is a beautiful grove of old liveoaks on the banks of Lacy Creek, about six miles west of Sterling City, in Mrs. James McEntire's pasture. It is a beautiful place. The old trees on either bank reach out with their long limbs as if to protect and give shade to the brook that flows by to give them water. It was also the scene of a bloody tragedy between white men and Comanche Indians that occurred in the early 1870's. The author of this account participated in the terrible battle and offers this first-hand account.

"O, Death, Where Is Thy Victory?

Back In Memory To The Wildwoods

Account describes the early days of Harris county and the timbered lands of Texas. It was written by Mr. Moore of Houston, Texas who vividly recalls the woodlands of Texas during his lifetime, and sighs over some of the changes which have occurred.

Eye-witness account of Indian fight which took place in August, 1873, between a small posse of citizens of Round Mountain in Blanco county about fifty miles distant from Austin, and a band of marauding Indians which had committed a horrible murder in that neighborhood just a few days before.

Fredericksburg, in Gillespie county, Texas, was founded by John O. von Meusebach in 1846, when he brought a colony of some 1,000 industrious German emigrants from the New Braunfels contingent and settled then, on lands on the Pedernales river. This account offers excellent early history of the town.