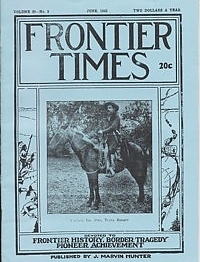 Incidents Of The Buffalo Range

By John H. Cook, Author of "The Border and the Buffalo."

"Most all the big-game hunters were men of adventure. They loved the wild, uninhabited region of the great Southwest. Nearly all of them had read of Daniel Boone wandering alone in the wilds of the then uninhabited lands east of the Mississippi. Most of these men had passed through the War of the Rebellion, on one side or the other. They were of necessity self-reliant, and could and did meet every emergency as a matter of course."

"Take the incident of Ben Jackson. He left his lonely camp, 200 miles from Fort Worth, with a two-horse load of buffalo hides, and twelve miles from his starting point three Indians made a running attack on him. He killed one of them, and the other two ran out of range of his gun. He was on the divide between North and South Pease rivers. After traveling a mile or so from the dead Indian, he noticed the other two paralleling him, one on either side, and just out of range. All at once "kerchug!" and down went the left front wheel of the wagon. The sudden drop brought Ben to the ground; also his gun, mess kit, bedding and ammunition box. He was nearly a mile from wood and water. The two Indians saw the predicament he was in and they circled in between him by the South Pease river. He unhitched his team, hobbled them close to the wagon, laid down flat on the ground, crawled like a snake towards a break to the right of him, and when about 300 yards from his outfit he wriggled himself into a deep buffalo wallow in the edge of a prairie dog town. And here he lay, peeping out on the flat and waiting events."

"The hill in the break towards which he had been crawling was less than 200 yards from him. While lying here his alert ear and steady eye taking in everything around him, and his mind busy evolving a way out of his present predicament, a large diamond rattlesnake came crawling obliquely just in front of him from a nearby prairie dog hole. Not wishing to disclose his position by shooting the snake, he suddenly …"

Story of Antonio, the cabin boy, (Antonio Navarro) who was engaged in a struggle for Texas liberty, though his story begins thousands of miles away from his native Island of Corsica.

The Man Who Lives In A Cave

Account of Mrs. Clarintha Draper, pioneer who lived to be 105-year-old. She and her husband, George Washington Draper settled in the late 1860's on Cold Creek, Llano county where they had a successful ranch for many years.

Mrs. Hall, whose family came to Texas in 1850, describes first-hand look at characteristics, techniques, and lifestyle in pioneer Burnet county school days where she grew up.

Indian Fight On The Concho Plains

Account of an August, 1875 engagement between Roberts and his men near the line of Kimble and Mason counties which was precipitated by two long-time captives of the Indians - one a white and the other a Mexican.

This negro sermon by J. Riley Green, was sent in to Frontier Times by Harry Rand, of San Antonio. The subject was "The Prodigal Son"