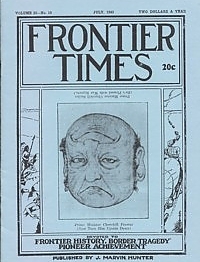 Account is detailed eye-witness description of the hanging of a man named Remine in the spring of 1881, in Silver City, New Mexico.

Account of Joe Benton in Nocona, Texas and the possessor of one of the largest collections of books on Texas literature, Texas history and folklore.

It Was Garden City Or Bust

Account describing early days in the tiny town of Garden City, TX in Glasscock county, and the establishment of it's one and only newspaper.

A poem by Nettie Walton Watson.

Account of the feud between cattlemen that arose to proportions that gave it the name of the "Mason County War."

Relics Of The Ancient Chimus

A Story Of "Billy The Kid"