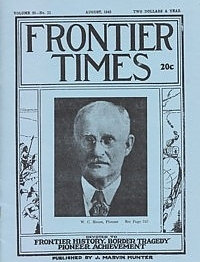 Jane Long, The Mother Of Texas

Account of Mrs. Jane Herbert Long, called "The Mother of Texas," who was born on the 23rd day of July, 1798, and was the devoted wife of Dr. James Long, who was a surgeon in the army of General Andrew Jackson, but who later became involved with the popular idea of the conquest of Northern Mexico, which then included the vast country of Texas which was under the dominion of Spain. Long was killed in battle, but Jane continued on to live a noble and daring life in poverty, affliction and in many formidable accomplishments. Here is her story.

In this account, Roberts offfers first-hand details of events in June, 1880 and the efforts to round up the last of the "Billy the Kid" bunch that had operated in New Mexico. Their names were Jesse Evans, John Gunter, and three of the Davis brothers. Events occurred in the Fort Davis area of Texas.

Account of Sheriff L. B. Williams of Liberty county, Texas, who personally exonerated a man falsely accused of murder, though he was convicted by a jury. He and his wife had to relocate to escape the implications of Williams appeal to a law higher than that of the local magistrates. Here is the story.

By Major Morris U. Lively

Account of W. C. Moore, who was a pioneer in Texas oil industry and had been active in developing the petroleum resources of the state since the early days at Spindletop, and was well known in the oil fraternity as well as in Houston's business world.

Account describing one of the coldest winters in Texas history and of the snow of December, 1878, and January and February, 1879, particluarly in the Llano Estacado, or Staked Plains region.

J. Frank Dobie And His Work