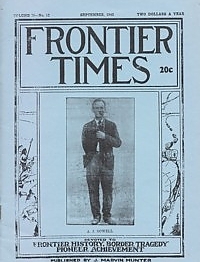 A. J. Sowell, Ranger and Author

Account of Andrew Jackson Sowell, who was in his youthful days a Texas Ranger, and later became the author of several outstanding books on Texas history. Hundreds of the old time citizens of the Hill Country knew him well, and all highly praised him as a man of high ideals and lofty courage.

First-hand account of an Indian fight which took place in Coleman county, Texas, in 1868 in which the author was a participant and survivor.

The Battle On The Nueces River

As Seen and Reported by Captain John W. Sansom

Eye-witness account of the Union forces engaged in the battle with Confederate forces on the Nueces river, August 10, 1862.

A Woman In A Ranger Camp

Account of Mrs. Luvenia Conway Roberts, pioneer widow of Texas Ranger Captain Dan W. Roberts. Immediately after her marriage to Captain Roberts in 1875, she went, as a bride, to a Texas Ranger camp on the San Saba river, near Menard, and she spent six thrilling happy years in camp with her husband and his gallant Rangers.

The Massacre In Elm Pass

Some nine or ten miles a little east of north of the town of Bandera is Elm Pass, on the old Bandera and Center Point road. Though not as noted as Bandera Pass, about four miles to the west, Elm Pass was used as a route by marauding Indians when raiding the Guadalupe river settlements of Comfort and Center Point, and then coming over into the Medina river valley. Several distressing incidents and tragedies have taken place in Elm Pass, one of which is the subject of this account. It is the tragic story of the massacre of a party of Mexicans, by Indians, which took place in the year of 1847 and is related by Theodor Mazurek, a former citizen of Bandera.

"Robert Paul McNutt was born in Knoxville, Tennessee, June 10, 1845, and died in Hutchinson county, Texas, September 16, 1941. Coming to Texas in his early twenties, he soon joined the Texas Rangers under Captain June Peak, and served some ten years, taking part in all the campaigns of that well known company. On retirement he settled in Dallas county, and married a young widow by the name of Wells, by whom he had two sons, Roy and Kenneth McNutt. In 1901 he …"