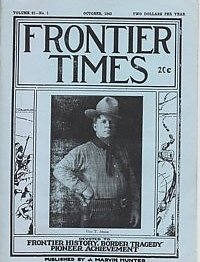 Account of Gus T. Jones who served two years as a Texas Ranger, a short term as night marshal of the city of San Angelo, and then in the service of the F. B. I., having belonged to the division of criminal investigation of the department of justice, from which the F.B.I. was created. He was the holder of the world's championship with the Thompson sub-machine gun, won at Camp Perry, Ohio, during the National Matches held in 1935. He was also the holder of many marksmanship medals, citations for courage and efficiency, and letters of commendation from his superiors in many branches of service as well as from the government of Mexico. His grandfather had emigrated to Texas in 1829 and fought in the Texas War of Independence. His father, also born in Texas, had served from 1870 to 1874 in the Texas Rangers.

A Treaty That Was Kept

Account of daring meeting between John O. Meusebach of the Fredericksburg colony and Ketemoczy, one of the Comanche chiefs, on January 26, 1847. This meeting, or pow-wow, which was held on the San Saba river, and was probably the most notable in the annals of Texas history. It was attended by twenty chieftains, most prominent of whom were Chief Ketemoczy, Chief Santana, Chief Mopechucope,. and Chief Poc-Nana-gnarhip. The meting resulted in a treaty whereby the colonists would be allowed to go unmolested on their grants. The whites agreed to treat the Indians with fairness at all times, and would welcome them to their colony. This treaty was never broken by the colonists or the Indians during the time John O. Muesebach was in leadership at Fredericksburg. There is the story.

A Beloved Daughter Of Texas

Account of Miss Clarinda Loveworth Latham, also known as "Aunt Rin' Latham, who was born and reared in the Hill Country of Texas. Her parents were Rev. and Mrs. G. W. A. Latham, early settlers of Llano and Blanco counties. Rev. Latham was one of the pioneer Baptist ministers of that section, and preached in many of the frontier settlements. The family moved to New Mexico in 1898, and pioneered out there. Rev. and Mrs. Latham raised a family of twelve children. One of the sons, James V. Latham, became a Texas Ranger, serving in Company D under Captains Frank Jones and John R. Hughes. Includes photo of Latham, Hunter and Dave Dillingham.

Account of James Buchanan Gillett, who was born in Austin, Texas, November 1, 1856. He joined the Texas Rangers in 1875 and first served under Captain Dan W. Roberts in Menard county, with Company D, for 16 months. This began Gillett's long-time service to the Rangers over the course of many years. He was marked by courage, ingenuity, and great physical endurance and left a legacy as one of the foremost Texas Rangers of pioneer days. This is his story.

Although Texas has produced many able officers in Many conflicts, it is an interesting fact that none of them in the earlier days of the Nation had been trained at the United States Military Academy. It was not until 1874, that Frederick William Sibley, her first native born West Point graduate was commissioned from that famous institution. This is the story of Sibley, and of other early West Point graduates from Texas such as General Ebenezer Swift and of John Pitcher.

This first account in the series deals with the establishment of five Texas frontier forts and of the booming Buffalo industry (slaughter).

The editor, who was for more than fifty years a plain country newspaperman, dod try his hand, for a brief season, as a cattle rancher on Copperas Creek in Kimble county. This is the story of his experience.

Account of Mrs. Elizabeth Powell, or the Widow Powell, as she was known to early settlers of Fort Bend county, and of the old Elizabeth Powell home, located on the east bank of Turkey Creek, about fourteen miles west of Richmond.

By Major Morris U. Lively, Chaplain U. S. Army.

Ab Blocker And The XIT

Account of the famous old XIT headquarters ranch, and of Walter Farwell, Ab Blocker, and other prominent cattlemen associated with the famous three-million acre ranch - the biggest in the history of ranching.

Uncle Pleas Tackitt and His Boys

Account of a fight between Indians and "Uncle" Pleas Tackitt, in Young county in 1860, written by James N. Frazier.

Sketch of Uncle Alf Reeves, one of the earliest settlers of Mason county, one of the most widely known pioneers of that section. Mr. and Mrs. Reeves came to Mason county soon after their marriage on September 10, 1874 and lived on their ranch for 58 years.