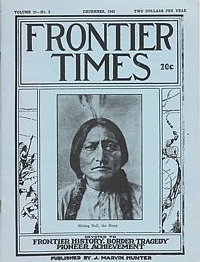 Account of Sitting Bull, the noted Sioux warrior and tribal leader of the Hunkpapa Teton branch, and, according to the Hand Book of American Indians (by Hodge) was born on Grand river, in South Dakota, in 1834.

Experiences of Harry Young when he was a tenderfoot teamster (freighter) in Wyoming during the summer of 1872.

When Guns Blazed In Tascosa

Account of old Tascosa, one of the wildest cow towns on the frontier. Situated in the Panhandle, where some of the largest ranches in the world were located, this cluster of huts was a supply center and a stopping place for outfits trailing their great herds to Dodge City, Kansas. A blacksmith shop, where cow ponies were shod, was the nucleus for this boom town. Picturesque figures colored the pages of Tascosa's history: Pat Garrett, Jim East, Charlie Siringo, Billy the Kid, Charles Goodnight, Dr. Henry F. Hoyt, and others. Here is the story.

All the fight has gone out of Fort Griffin, and nearly all the people has gone, too. The rattle of death set in last September when citizens voted two liquor stores out of business, anti today this once rip-roaring West Texas frontier hotspot is as dormant as a gangster's conscience. Further Mentions: Art Newcomb

Account of stalwart Bandera county pioneer mother, nurse and midwife, Palestine Wilson who was born in Arkansas, February 2, 1859, and came to Texas when she was sixteen years old. They settled in Denton county for a while, but the following year she married Peter McDaniel Wilson and went to live in a little home of her own. Not long after, her parents, Mr. and Mrs. Hillman, left for Bandera county where she later came and settled. This is her story. Contains some old photos of Palestine Wilson.

An Attack On Laredo

Account of Federal attack on the town of Laredo, Texas, in March, 1864. The purpose of the attack was to secure provisions from Confederate forces, particularly cotton, which the Confederates used like money.

This installment details the disastrous Nolan-Harby Expedition, the Lone Tree Fight with Comanche Indians and begins a lengthy and detailed look at frontier towns and early day ranches.

Tough Hombres Had Their Uses

Account of Jim McIntire and sketches from his earlier career, who was known to have killed Indians and skinned them, chased outlaws across the plains with the Texas Rangers, hunted buffalo, enjoyed the hazardous life of a cow-puncher in the early days of Texas, run gambling houses and saloons, served as marshal and deputy sheriff in frontier towns, shot up towns, and been mixed up in shooting scrapes, etc. He was also chased across three states with a reward of $1,000 on his head, dead or alive; was captured and broke jail, and saw as much lawless life and had perhaps as many hair-raising adventures as any man living.

Account describes a cunning and bold act on the part of Comanche Indians in Montague county on the night of June 5th, 1858, when a large herd of horses was stolen right out from under the noses of a party of men who were keeping vigilance against such an event.

Of all the daring leaders who have blasted their way through blood and violence to the top of American outlawry, none has achieved more lasting renown than Jesse James, that dashing, fearless Missourian who terrorized half a dozen states for nearly twenty years after the Civil war. What of his character? A brutal, bloodthirsty rogue? Or unfortunate hero, driven to lawlessness by the school of hard knocks? The truth lies somewhere between the two extremes of callous brutality and knightly courtesy. This story is a study of his character.

The Texas Of Today

The account is a lecture given before the Texas Landmarks Association in San Antonio, Texas, on October 14, 1943, by Edward M. Golson:

"I am grateful 'to your President and those in charge of your programs for asking me to address you today. For my subject I have not' chose,: Texas of the olden days, of which I am sure you have had many lectures, but Texas of Today, our Texas which symbolizes the greatness of our country. I suppose no man has ever seen enough of Texas who can truthfully say what Texans were fighting for in the days of Sam Houston, Davy Crockett, Travis and Bowie, and what we Texans are fighting for in the days of General Eisenhower, Admiral Nimitz and Carmichael, and other Texans who gained fame on various battlefields…" etc, etc.

The Handbook Of Texas

"As yet The Handbook of Texas is but an idea, known only to me and to a few members of the Texas State Historical Association. I think it proper that The Handbook of Texas, or any book, should originate in an idea, and I have noticed that those which do not so originate are birds of swift passage. It is my opinion that The Handbook will become more than an idea; it will materialize, I hope, and if it does materialize, it will be in my opinion, one of the most important books that has ever come out of Texas and it will, if properly done, be the most used book in Texas for years to come." Etc., Etc.