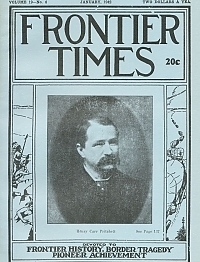 One Of Our Texas Queens

Account of Mrs. Birdie Crosby Harwood, of Marble Falls, Texas. Mrs. Harwood was perhaps the first woman in the United States, who ever held the office of mayor of her city, serving as Mayor of Marble Falls until she voluntarily retired from the office. Not only had she won political honors, but she also achieved much fame as a horsewoman, having ridden in parades in various Texas cities, and in New Mexico and Wyoming. Here is her story.

The following account of a desperate battle with Indians on Devil's river in 1857, was related to John Warren Hunter by H. G. Rust, in San Angelo, Texas, in June, 1911, and was at that time published in Hunter's Magazine.

A poem by Badger Clark. An excerpt:

"…But never let them say I'm mean or small!
Make me as big and open as the plains,
As honest as the horse between my knees,
Clean as the wind that blows behind the rains,
Free as the hawk that circles down the breeze!
Forgive me, Lord, if sometimes I forget
You know about the reasons that are hid.
You understand the things that gall and fret;
You know me better than my mother did.
Just keep an eye on all that's done and said,
And right me, sometimes when I turn aside,
And guide me on the long, dim trail ahead
That stretches upward towards the Great Divide."

Wild Animals I Have Tamed

"The boy who is raised in a city does not have the pleasures and enjoyment of the boy who is raised in the country, for the city boy misses many things that fall to the lot of the country boy. I was raised at Mason and Menardville, both country towns in what was then called West Texas, but with increasing population westward, these two towns are now considered in Central West Texas. Some of the sports and pleasures of my boyhood days were fishing, swimming, and hunting. There was plenty of game, too, and the Llano and San Saba rivers abounded in fish, especially perch and blue catfish. It was no trouble at all to go out before breakfast and kill a big turkey gobbler within a mile or so of where we lived, and as there were no restrictions on the number of deer or turkey, one could bag as many as he wanted. I generally kept a good coon dog, and my chums also had coon dogs, and during the winter months and in the early spring we went coon hunting at night. It should be remembered that in those days we did l not have automobiles and moving picture shows to indulge our desire for pleasure, but we had plenty of other forms of recreation, and coon hunting was one of them. To get out on old Comanche creek there at Mason, with two or three good coon dogs, was a delightful privilege, and we seldom failed to "tree" two or three coons, or two or three 'possoms and occasionally a bob cat, which provided plenty of sport and excitement. One night a group of boys, including Mick Hay, Wes Smith, John and Irvine Mayo and myself, with four dogs, went down in the Eckert pasture on a coon hunt. It was a cloudy night, and misting rain.. Our dogs soon "treed" something in a large, spreading tree, and we had some difficulty in locating the animal, because of the darkness, and the thick branches of the tree. At last, however, we discerned a bulky object…"

Article describing the political and social intensity of passion that attended the days leading up to the secession of Texas and the southern states from the union prior to the Civil War. All of these were exciting incidents, interwoven with those that occurred during the interim, when the famous "Secession Medley" was passed down the line through the Southern States, rallying these states to the cause of the Confederacy. This medley was a stirring composition, and was copied by Laura Freeman of Navasota, TX in March 25, 1864, to be preserved for posterity. Here it is, as transcribed from the dim tattered manuscript, reproduced in this great article.

"ONE SMALL KEY "' UNLOCKS MEMORIES FOR HER FRIENDS

Excellent article giving ranch history of many prominent (and some not-so-prominent) ranches and Cattlemen of pioneer Texas. Includes an excellent account of the great cattle boom, which began in 1882 and collapsed in 1886.

The Capture Of The Horrells

In 1867, during the reconstruction when Texas was trying to rebuild her torn-up government under a guard of United States soldiers, The Horrells - three or four brothers of them from Lampasas county who were all old settlers there and who had many loyal friends - were very zealous in keeping up strife over the "dead war" issues, and caused much trouble in Lampasas county and elsewhere. This is the account of their capture by Captain Tom Williams.

The Story Of Old Glory

U.S. Marine account of the story of the origin of our National Flag which parallels the story of the origin of our country. As our country received its birthright from the peoples of many lands who gathered on these shores to found a new nation, so did the pattern of stars and stripes rise from divers origins back in the mists of antiquity to become emblazoned on the standard of our infant republic.

The Battle In Palo Duro Canyon

Account of a fight with well mounted bands of Comanches and Kiowas of which there is but little known which took place in the Palo Duro Canyon on the Staked Plains in the waning days of September, 1874.

Written by John Warren Hunter in 1911.

On the first of April, 1865, Captain Mullins of Coleman was in command of 300 men, who were camped on Hoard's Creek, in Brown county. These men were part of what was known as the Frontier Battalion and had been organized for frontier protection. This story details the fight which ensued near the Tankersley ranch and the Hackberry Water Hole, near the road leading from San Angelo to Eldorado.

Cole Younger Gets A Motor Ride