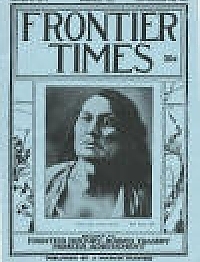 Alsate, Last Of The Chisos Apaches

The area of Texas lying between the Pecos and Rio Grande rivers and south of New Mexico was the last foot hold in this state of the wild untrammeled Indian. in 1873 the Comanches and Kiowas gave up their privilege of making a home in the Panhandle and, when in 1882 the Chisos Apaches were trapped by the insidious policy of Porfirio Diaz and distributed as slaves one by one in various parts of Yucatan and Campeche, the Indian ceased to be a factor on the Texas border. Here is the account of Alsate, the last of the Chisos Apache chiefs.

Account of Frank S. Gray, native of San Saba county, and some of the history of his county—notably about Indian incidents, cattle moving up the trail, the feud between the cattlemen and the sheepmen, and memoirs of pioneer days.

The Race Of The Railroads

It was a transcontinental race of railroad giants to tap the rich resources of Mexico and to establish a rail route through Texas to the Pacific Coast with Collis P. Huntington, Thomas W. Pierce and Jay Gould as the controlling factors of their respective lines. That was in 1881 after Huntington had built the Southern Pacific from California to El Paso, when Pierce was building the Galveston, Harrisburg & San Antonio west from San Antonio to connect with Mexico at Eagle Pass and running westward to connect with the Southern Pacific, while Jay Gould as the operator of two lines was building the International & Great Northern south from San Antonio to Laredo to connect with Mexico and also building the Texas & Pacific west from Dallas, headed for El Paso and the Pacific Coast. It was a race to command nationwide attention. Here is the story.1

The Killing In The Melon Patch

Account of a "bloody" night and a gruesome "killing" that took place in Mason County, TX.

Excellent ongoing account of the history of the cattle industry in Texas from it's inception to the rise of the giant ranches, the great drives and drovers and the coming of the sheepmen, barbed wire, etc.

The Indians who live along the Rio Grande valley in Northern New Mexico, particularly the Cochiti and Pueblo tribes, are a proud, ancient, self-sustaining, and in many respects, a lucky people. The region holds an ancient secret of mines, gold and silver. Here is the story.

Then And Now... Now And Then

Treasures In The Southwest

Mentions: the "Mine with the Iron Door," which is reputed to be somewhere in the mountains near Tucson, Arizona * the great Superstition Mountain country, just outside of the city of Phoenix, Arizona * The Lost Dutchman's Mine * a renegade band of Apache Indians living among the forbidding peaks and deep canyons, along the Sonora-Chihuahua border * Geronimo * "Bronco" Apaches * the buried "Skeleton Canyon Loot," some where in the Santa Rita Mountains * "La Mina Perdida,"

Great Flood At Coleman In 1900

This account is a narrative by an eye witness of the Coleman Flood of 1901, when several people were drowned.

The author, August Santleben for several years owned and operated a freight line from San Antonio, Texas, to Chihuahua, Mexico. He was one of the foremost frontier freighters of Texas.

On the front cover this month is a portrait of Chief Gall of the Sioux tribe. This story is a brief account of this chief of the Huukpapa Teton Sioux.