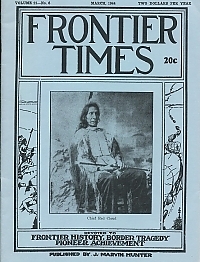 Chief Red Cloud Of The Sioux

Red Cloud (Kukhpiyalutat), 'Scarlet Cloud,' frequently known among his people as Mahhpinslut, (Red Cloud) was a principal chief of the Ogalala Teton Sioux of Pine Ridge Reservation, the largest hand of the Sioux nation, and probably the most famous and powerful chief in the history of the tribe. Here is his story.

Human sacrifices were adopted by the Aztecs early in the fourteenth century, about two hundred years before the Conquest. Rare at first, they became more frequent with the wider extent of their empire till at length, almost every festival was closed with this cruel abomination. Here is the gruesome account.

There is little doubt in the minds of those who have closely followed his life but that John Bell Hood was a great man, one of the greatest generals of the Confederate army, which was noted for its great warriors. Here is his story.

In the spring of 1871 the Bender family moved to the southeastern portion of Kansas and homesteaded. In the main they were an uncouth, unsociable German family of four, the elderly parents, their queer son, John, and a 20 year old daughter, Kate. She was the exception - brilliant, sociable, and attractive in fact; a contrast from the others. But she was a decoy and a snare—the plotter—the master mind. Her bosom nursed as foul a heart as ever fiction painted, a ghoul haunting the darkest recesses of Hell's Half Acre. Here is the bloody story.

About eight miles a little west of south from the town of Albany, TX is the old Ledbetter salt works, one of the most extensively heard of landmarks in the western portion of the State, and for many reasons the place occupies a most unique and unusual position in relation to the strenuous history of the West. Here Indian legends lead to the inception of the white man's commerce, both of which in turn harmoniously blend with the thrilling, tragic and romantic events incident to pioneer life. The old salt works are located just east of a chain of considerable elevations and on the bank of what is known as the Salt Prong of the Hubbard, and is surrounded by what would be termed a considerably broken but not mountainous country, and the fame or notoriety of the place is founded upon the vast salt deposit found in the stream at this particular point. Here is the story.

Account details the strange events surrounding the abduction by Indians and consequent long-term disappearance of the young boy, Johnny Ledbetter in the late 1860's around Fort Griffin, TX. His whereabouts were never discovered, unless he turned out to be the strange figure who showed up one day…

Account of the family history of Charles Montague Sr who with son Charles Jr came to Bandera Co and established a ranch and became prominent cattlemen and pioneers of the region. Includes old photo of the whole family, another one of Charles Jr family, and one of Gene Seng and Charlie Montague who fought and died together in the South Pacific in their uniforms.

Our Declaration Of Independence

Account of pioneer Texas freighter, August Santleben whose train of schooners and oxen was the first that ever hauled salt from the Pecos Salt Lake and he assumed great risks when doing it. Story goes on to detail some other adventurous and risky undertakings by the master freighter and early frontier entrepreneur.

'Ol 'HardPressed' Sam, the tick inspector. Here's what happens to those 'ol boys when they get 'em a Guv'ment job!

Belles And Beaux Of 40 Years Ago

Account of couples and marriages enacted in Mason, TX during early 1890's.

Brief sketch of Dr. Benjamin B. Beakley, a true type of the faithful old country doctor, who never failed to respond to calls to relieve human misery. Dr. Beakley had practiced medicine in Mason county for about forty years. Here is his story.

Brief sketch of Miss Nan Hillary Harrison, who was a well known newspaper woman and writer. For several years she was on the staff of the San Antonio Express and was the author of several books, one of which was "Frontier Fighter," the life story of George Coe of New Mexico.