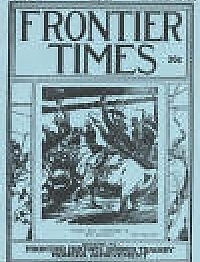 In the late 1800's the country schools in Texas were somewhat different from what they are today. This excellent article compares the buildings, teachers, curriculum and experience of the school house at that time with those of 1944.

Brief obit of S. O. (Oney) Loyd, aged 63. who passed away at Medina, Texas, May 18th, 1944. He was a son of the late Eli and Virginia Loyd, early Texas pioneers, and was born in Bandera, county. Further Mentions: Edgar Loyd of Moore, Texas; Mrs. Grace Chism of San Antonio, and Mrs. Hilda Evans of Medina

Me And My Dog, Tige

Account describes a bloody raid involving the author, his men and a band of ravaging Apaches under Mangus Colorado (Red Sleeve). The incident occurred In the spring of 1854 between Opo de Aguila (Eagle Springs) and the Rio Grande.

The old-time Texas freighter tells of his experiences near Chihuahua, Mexico in 1874 when trying to cross the border into Texas with what the Mexicans regarded as contraband coinage. The incident nearly ruined the frontier freighter financially.

During the Civil War several attempts were made by the Northern forces to invade Texas. All these expeditions were met on or near the State's borders and compelled to withdraw after engagements with Texas troops—all except one, the strangely unrecorded battle of Fort Lancaster, where California's troops were turned hack, after actually being in Texas. Here is the story.

Tragedy Of The Suicide Seven

Account of the "Suicide Seven" -- seven men who played important parts in the history of the Lone Star Republic. These gentlemen were George C. Childress, James C. Collingsworth, Phillip Dimmit, Peter W. Grayson, Dr. Anson Jones, S. W. Jordan and Thomas Jefferson Rusk. Politicians and soldiers, all of them leaped into the turmoil of revolutionary days, did their part in freeing Texas from the tyranny of Mexican rule and then, in moments of despair, ended their own careers.

The Story Of Old Camp Nichols

Account of the old fort near Amarillo which once constituted the earliest fortification constructed by the government in the Panhandle country.

This sketch of some of the hardships endured by the early settlers was related to John Warren Hunter in 1910 by R. J. Newton, who at the time was living near Eden, in Concho county.

How Camp Creek Was Named