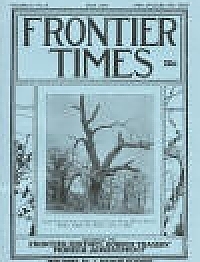 World History Is In The Making

"The mighty invasion of Europe is now under way. On June 6th American and British troops successfully made landings in Normandy, and are now engaged in the mighty battle for which the world has waited—the Battle of Europe. Thus begins Marvin Hunter's description of D-Day from the viewpoint of a Texan and a historian."

Witnessed The Fall Of The Alamo

"One hundred and eight years have passed since the Alamo fell, on March 6, 1836. On March 6, 1887, the following article appeared in the San Antonio Express, and we pass it on to our Frontier Times readers to file with their records of that great tragedy"

"The dead were heaped in wild confusion all over the place, and the gutters fairly ran with blood. In a room on the ground flour was the corpse of Colonel Bowie, who had been butchered upon his sick bed. Not far from him was found the brave and eccentric Crockett„ but the most impressive sight was in a small room in the upper story, where the gallant Travis lay, a bullet hole in his forehead, surrounded by the corpses of 15 Mexicans who had died by his hand."

THE TREE ON OUR COVER PAGE.

Pioneer freighter, August Santleben describes his many freighting trips from Mexico to Texas. He especially focuses on an occasion when he started back to Texas with the largest amount of money and copper that was ever brought from Chihuahua. He carried $350,000 in Mexican silver, for which he received two and a half per cent, or $8,750.

Discovery Of A Rich Silver Mine

Regarding the discovery of the famous silver mine called the Plancha de Plata, John W. Baker says:

"In the summer of 1883, Mose B. Stevens and Ike Stevens and I met in Clifton, Arizona, and arranged a prospecting trip into Northern Chihuahua. Mose and I started out for Deming, New Mexico. Learning that a party of Apaches were headed south from the Black Range, I joined a party at Deming, composed of Captain Birchfield and others, and proceeded to Brass Kettle Springs, in the Florida Mountains, there to lie in ambush for them. But they rushed by toward Palomas Lake in Mexico, and we followed along with a troop of U. S. soldiers in pursuit. At Palomas Lake all our horses got away in the night, and we returned afoot to Deming. Then Mose Stevens and I went in a wagon, southwest through Ascension, to a Mexican settlement or ranch called Trincheras, where we met an American named Jim Engels, who was a blacksmith, and had been prospecting and mining in the neighborhood of the Tres Hermanas Mountains and had drifted into Mexico. He was making a wheel for the Mexican ranchman…"

This account is the story of how the officers and enlisted men of Fort Sill, OK were the foundation of the preparation of that state, between the years 1873 and 1903, for future statehood which came in 1907.

The Great Pyramids Of Mexico

As old if not older than the Pyramids of Egypt; larger in some ways; more beautiful in ornamentation; with their own symbolism; more than one hundred pyramids, wrapped in the silence of thousands of years, keep their ancient secret in the Valley of Pyramids at San Juan Teotihuacan, Mexico. The Tombs of the Egyptian kings, whose discovery and penetration have held the ear of the world, are not as old, nor as mysterious, as the sacred pyramids of Mexico. Here is Mr. Hunter's personal and eye-witness reflections after a trip to the region.

"Texas has always had an allure for the Army, and seven flags have flown over it and her sovereignty has changed eight times. Alonzo Alvarez de Pineda explored her coast in 1519; Cabeza de Vaca and his companions were shipwrecked at Galveston as it is now known, in November, 1528, and with three companions reached the Pacific coast eight years later; Francisco Vasquez de Coronado came to North Texas with his army in 1541; Hernando de Soto's band was here in 1542; Rene Robert Cavalier, Sur de la Salle landed in Texas in 1685; Captain Alonso de Leon, Governor of Coahuila, came here to destroy Fort Saint Louis in 1689; Captain Domingo Ramon came to Texas in 1714; Martin de Alarcon, Governor of Coahuila, Texas, founded the Mission of San Antonio de Velcro and the Presidio of San Antonio de Bestir in 1718; and about the close of the eighteenth centu'•p the eyes of America were east on Texas. The cupidity of Aaron Burr and General James Wilkinson, and the farseeing eye of Thomas Jefferson looked longingly at Texas. Jean La Fitte the pirate, found Texas, with its lone chain of coastal islands a good hiding place from which he could waylay rich caravans or continue his slave trade. Lieut. Augustus Magee was here with his green flag in 181213, and the Republican Army of the North, which met defeat after his death, at the battle of the Medina, southwest of San Antonio August 18, 1813, and many of the prisoners and wounded died in Pan Antonio, slaughtered in a barbarous manner.

Following the visit of Moses Austin to San Antonio in 1820, his son, Stephen, brought 300 families to settle in Texas. The Texas Revolution in 1835 and 1836 brought many adventurous young men to Texas, who fought and died in San Antonio and its vicinity until Texas freedom was won at San Jacinto. General Raquel Vasquez captured San Antonio March 5, 1842, and General Adrain Woll recaptured San Antonio Sept. 11, 1842; Colonel William S. Harney, 2nd U. S. Dragoons, was here in San Antonio in the fall of 1845, and Brigadier John Ellis Wool was here with his Army of the Center the following summer, and Captain Robert E. Lee was his Topographical Engineer. The troops came back to San Antonio for station in 1849 and remained here since then. The Confederate States Army occupied San Antonio from March, 1861, to May, 1865. In the decade following the War Between the States America was suffering from growing pains. Many soldiers returned to wrecked homes and found no work. Boys growing up on farms too small or too unproductive to support them; the craving of youth for the frontier was felt and "go to Texas" was no longer a malediction but a beneficent recommendation. Any man who came to Texas seeking adventure found it in the Army, chasing Indians. Railroads were penetrating the Lone Star State and emigrants and industry followed in their wake. For nearly a century Texas has had more United States troops than any other State. It was a commonwealth of unlimited resources with a variety of climate not found in any other State. By our treaty with Mexico, we guaranteed them safety from marauding Indians from north of the border, so our army here had to be large enough to handle the situation.

San Antonio was selected as our center of supply and administration. except for a short period, when it was moved to Austin in August., 1873 The Alamo for many years was the quartermaster's depot, and headquarters were in the Vance building, on the site of what is now the Gunter Hotel on Houston and St. Marys; then the French Building southeast corner of Main Plaza; then the site of the Maverick Building, Houston and Presa Streets, until it was moved to what is now Fort Sam Houston. All the buildings were leased. After the War Between the States the Maverick Hotel, southwest corner Houston St. and the Alamo Plaza, was leased on the north side of Houston Street from Alamo Plaza to Navarro Street. The Mengers leased property for barracks on the west side of Alamo Plaza…"

All records for a book ever written by a Texan or about Texas have been smashed by Boyce House's "I Give You Texas." Here is the story of the famous book.

One of the worst hailstorms recorded in Texas fell in San Antonio on May 19, 1868. The hailstorm, as described by the San Antonio Express of that date, was a fearful and awesome thing. Here is the account from that paper dated May 21, 1868.

"Our city is a perfect wreck, every house in it has received some damage, many are complete ruins, with nothing but fragments of walls standing. The hail stones penetrated the best roofs, going through the roofs like cannon balls. All the windows facing to the north have been smashed in, even window shutters and doors were broken down. The appearance of the city could not have been worse under a severe bombardment. Trees are stripped of their leaves and branches…The roofing of the entire city is perforated like a sieve."

A DREAM THAT FAILED

Port Arthur News. The march of time and events has erased almost completely the knowledge that an established townsite preceded Port Arthur by over half a century. The town of Aurora does not appear in history, yet it is not a glamorous legend. And were it not for old land deeds, preserved through sentiment and the lasting memories of some of the oldest settlers, the true facts concerning the abandoned city, might have been lost to the lore of this section forever. Here is the story of Aurora, TX.

"The court house in any county seat town, provided the building has been there a long while, could tell many many stories, if its time-grimed walls could only speak. Of course, there are the records in the county clerk's office of the marriages, births and deaths. Then there are the wills and petitions in the district clerk's files—divorces, land titles, business disputes, bankruptcies. But it is the district court room that is the most fascinating for here, from the witness stand, have been unfolded stories of rage, robbery and revenge. Defendants sat pale and shaking and mothers wept as attorneys fought, with a human life at stake.

The old court house at Eastland…"