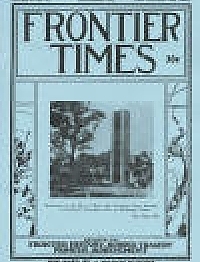 Account of Captain William Eastland, for whom Eastland county, Texas, was named, and in memory of whom the monument on Monument Hill, LaGrange, Texas, was erected.

The First Sheriff Of Bandera

Account of frontiersman, William Curtis, who became sheriff when Bandera county was organized in 1856. When the Civil War came on, Curtis' sympathies being with the Union, he decided to leave Bandera county and move to California. He settled in San Bernardino county, California, and became quite wealthy. He died at Redlands in 1912, at the age of 76. Here is his story.

Account of the notable Irish settlers and frontiersmen, the Gamble brothers, Judge William Gamble and his brother, Dave Gamble of Live Oak County.

The Trials Of A Pioneer Woman

Account of Mrs. Clara Feller, a Fredericksburg pioneer, who came to Texas as an immigrant in 1845, when she was about 13 years old.

Account of Mrs. Laura Portwood Yates who was born in Hill county, Texas, June 1, 1865. She was a member of a very large family, of the highest type in pioneer life. In 1866 her father, John Harrison Portwood, moved his family to Helena, Karnes county, Texas, where he settled on a stock farm on Rhymes Creek, near Helena.

Account of the old Mission San Saba, one mile above the present town of Menard.

Account of grisly old Texas buffalo hunter, Charles Dixon and his transition from buffalo hunting to prospecting with his companion, Pat Garrett west of the Pecos in the spring of 1877.

Account of Judge Charles E. Davidson, 88, with the exception of one term county judge of Crockett county since its organization in 1891