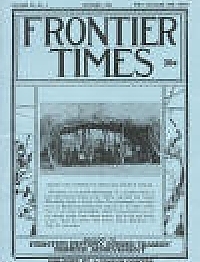 It is not the rule of Frontier Times to publish news of current events, except wherein such news in time may become matters of historical record, and of interest to future generations. The daily and weekly newspapers of the country cover the field of current events so well that we have been content to devote our space to "frontier history, border tragedy and pioneer achievement." Now and then we may depart from this rule to publish something that is of interest to the geologist, the archaeologist, the botanist, the ornithologist, or the scientist, and sometimes we mention the demise of a pioneer who has had a part in the making of Texas history.

The favorable turn of the war in Europe, brought about by the American troops' invasion of Normandy less than three months ago, and the rapid liberation of France and Belgium as a result of our American farces superior strategy and fighting ability, and the victories they have thus far achieved, despite the vaunted impregnability of "fortified Europe" and Nazi "secret weapons," impels us to give our readers our view of the situation as it exists today, September 12, 1944

Bell county had a short way with horse thieves in the 1870's; in fact, the good folk of that county felt strong and severe disapproval for wrongdoers of all kinds, particularly horse thieves. Some time during the early 1870's there was a flare-up of honest indignation which gave Bell county the name of being unhealthy for desperadoes. This is the story of when sheriff Sneed Blanton arrested nine men for horse thievery and how they dealt with it.

Account of Bell county's first murder -- The case of the slaying of Donald Smith -- the victim in a bloody axe murder that occurred on Apr. 18, 1852 in the town of Nolanville now Belton, TX.

The story and histories of the people who inhabit the virgin forests and the great rivers Pastaza, Morona, Upano, Santiago, etc. They represent the most warlike of all Indian tribes in South America. Includes photo of Shrunken Human Head in the Frontier Times Museum.

This is the story of Belle Starr, one of the most daring female desperadoes in history. This woman possessed a feminine appeal that rivaled that of Cleopatra, and a power of leadership comparable to the genius of Napoleon, she was one of the most agreeable, yet craftiest, persons of her sex. Her deeds of outlawry seemed to be more for the pleasure of excitement and chase than for the desire to take human life and, according to old timers who knew her personally, she never killed a man. This is her story.

With the coming of the first railroad to El Paso, there came also many bad men, and that city's mayor and city fathers concluded in their wisdom that they must have a city marshal who would be "badder'n anybody," and they succeeded beyond their expectations when they imported one Dallas Studemeier, and installed him in that office. Here is his story.

From Wilbarger's "Indian Depredations in Texas."

Detailed account of the brutal Indian attack upon a brave teacher and her log schoolhouse in 1867, on the south bank of the Leon river in Hamilton county.

Account offers detailed history concerning the German colonists who came early to Texas and became an integral part of the citizenship of the Republic, and later the State of Texas.