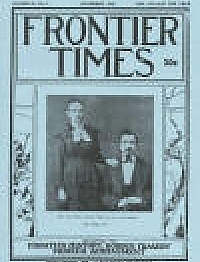 When Jim B. Miller was hanged by a mob of citizens at Ada, Okla., in 1910 there ended the career of one of the worst and most dangerous of all the bad men who in the old days made a practice of man killing, and when the wires flashed the news throughout the length and breadth of Texas there was rejoicing in many places where Miller had formerly lived. Especially was this the case in Reeves County, the scene of the notorious Frazer-Miller Feud. Here is the story.

Texas Journalism In The Old Days

Account details when The San Antonio Express and Evening Courier reported the fact that an officer of the law went to see Blind Tom, on the first night of his entertainment, with his pistol on. The officer was Ferdinand Niggli, the sheriff of Medina county, who on that day conveyed from Castroville to Sao Antonio a prisoner (King Fisher) who was confined in the county jail of Medina county. Mentions: Bradin's stable * the Tremble murders * the Cordovas * Mr. Joe Benton of Nocella, Texas * C. N. Jones, and Mr. J. W. Wiseman

Account of Rufus McCormick Alexander and of his first and only trip up the old Chisholm Trail.

From Wilbarger's "Indian Depredations in Texas."

Account describes events that occurred in the region of what is now Travis County, TX in August, 1833. Josiah Wilbarger and Reuben Hornsby were of the earliest settlers in the region and were some of the first white blood shed by Indians in this part of Texas. Wilbarger would have been killed in the brutal attack were it not for the strange dream he had, as well as a dream that happened upon Hornsby's wife the very night of the attack. Here is the bloody and brutal story.

Texas Politics Now And Then

The Passing Of James E. Ferguson

James Edward Ferguson, a native Texan, was born near Salado, Bell county, August 31, 1871. He was raised on a Bell county farm as an orphan but educated himself in law and was admitted to practice as an attorney in Belton, and later to become governor of the state of Texas. His life and long career in politics is described in this account.

The Germans are pre eminently a sociable people. They cultivate with reverence the strongest family life and family ties, and are bound together in friendship by innumerable social, benevolent and literary societies and secret orders. In all of these societies the "Gemutlichkeit," a term beat translated by "good fellowship," predominates, diffusing good cheer among their members. In every city or town in Germany there exist several singing societies, athletic and gun clubs, social, literary, political and secret organizations, all established for the purpose of promoting good comradeship and rendering assistance to the needy. This commendable trait made itself felt with undiminished force among the Germans in Texas. After the first few strenuous years had passed and the German settlements had been firmly established the German's love for sociability, intellectual entertainment, mutual protection and pleasure asserted itself in their early Texas experience. Here is the story.

Son Of A Gun In A Sack