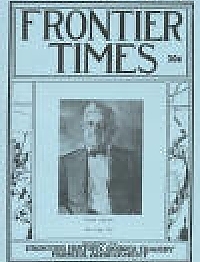 Account of Mr. Neil when, in the summer of 1885 he was captain of the cattle round up in the 7th District of New Mexico, extending from a distance just west of the Rio Grande on the east, to the Continental Divide and Arizona on the west. He, with about sixty cattlemen and cowboys were witnesses to the results of a strange and bloody event, the details of which were never fully uncovered. Here is the story. Mentions: Alamocito Creek * a very valuable mine in Southern New Mexico *

Account of W. P. Brashear, who in 1839, went to Lavaca county and while investigating land upon which to settle, was assaulted by Indians but was able to achieve a remarkable and daring escape. Here is the story. Mentions: a gentleman named Henseley *

ANOTHER PIONEER PASSES ON.

Obituary of Lewis Strickland, who was a native of Karnes county, Texas, and was one of the pioneer cattlemen of the state. He moved to California with his family in 1899, and for some years owned a fruit and stock ranch in Eldorado county.

First installment in an excellent and highly detailed four-part series of the fine service and notable exploits of Captain Ira Aten, a Texas Ranger and a peace officer during the 1880's and 1890's. Contains great old photo of Captain Aten.

A Tribute To Frank Ingham

Frank Ingham, of Midland, Texas, was born September 8, 1866, at Nebraska City, Nebraska. At the age of ten years he went with his father to Fresno, California, where his father engaged in the sheep business for a number of years. In the late 1870s, or early 1880s, they came overland with sheep to the Concho river country and ranged in what is now Runnells county. In 1884 the family located at Abilene, Texas, where Frank Ingham attended school for some time. There he met and married Miss Dona Watson, and they moved to the Runnels county ranch, and made that their home for some years, moving later to Crockett county to engage in ranching. Later he ranched in Upton county for awhile, then moving over into Reagan county, he helped to organize that county in 1903, and served as county commissioner until 1911, then moving to Midland, Texas, after turning his ranch interests over to his son, Homer Ingham, who was carrying on at the same place when Frank Ingham passed away, November 3rd, 1944. Here is his story.

The Founding Of Fredericksburg

Three Narrow Escapes In One Day

The following narrative, related by one of the few survivors of the engagement known as the Stone House Fight of 1837, furnishes a striking example of the trouble that may result from the careless deed of one unscrupulous individual.