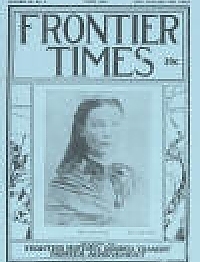 A Story Of The "Fighting Parson"

Andrew Jackson Potter was a. reformed gambler and race horse man. He was a native of Kentucky, and had only about three months' schooling as he was growing up. He was orphaned at the age of ten years, and turned to riding race horses to earn a living. At a campmeeting in Bastrop county, Texas, in 1856, Potter was converted, joined the Methodist church, and became one of the most widely known preachers on the frontier, making his circuit, on horseback, through Uvalde, Bandera, Kerr, Kendall, Mason, McCulloch, Menard, Tom Green, and other counties of the frontier, in the late 1860s, 1870s, and 1880s. He died in the pulpit, while preaching near Lockhart in 1895, after almost thirty years in the Master's service. Here is some interesting history of the fiery preacher and courageous Indian fighter.

A Trying Trip Across The Desert

Account of Mrs Ead's hard and dangerous trip from Denton, Texas to California in schooner wagons drawn oxen in May, 1857.

Account of a bloody Indian raid that occurred October 28, 1859, involving a ranchman in Uvalde county, named John Davenport, John Bowles, Doke Bowles and other early settlers of the area.

The Story Of Julia Long

Account of a pioneer Bandera county woman, Julia Long, who was born in 1850, the fourth of seven children. Her father, Samuel Andrew Long, was a San Jacinto veteran. Julia married "Seco" Smith, and settled in Bandera county, just after the last big Indian raid in Texas. Here is her story.

Mentions: Mr. and Mrs. B. H. Mayfield of Medina, Texas * Jane and Dr. James Long, of Point Bolivar fame * Lockhart * a place on the Olmos

A Long Cattle Drive To Montana

John Thomas Therwhanger came from Kentucky to Texas in 1891 when he was twenty-six years of age. He settled in the Knox-Haskell counties area, which was just being opened up to full settlement and development. There he raised cattle, built a ranch and rose to prominence in the community. This is his story.

The Overland Southern Pacific Mail and Stage Line was the greatest stage-coach line in American history. It covered 2,759 miles, from St. Louis to San Francisco, and was established by the government to solve the need of mail through the Middle States to the Pacific Coast.

Account of Laramie, WY deputy U. S. marshal, N. K Boswell and the time that he had strung up to hang, three notorious outlaws, Big Steve, Con Moyer and Ace Moyer. Includes an excellent old photo from an old daguerrotype of the three men hanging. Mentions: the saloon was called the "Bucket of Blood." * Jeff Carr * the notorious Jackson Hole in northwestern Wyoming *

The Mysteries Of Lonesome Land

This account provides an excellent description of the flora of the Mexican border country. To the botanist that is a most alluring region, all the way from Brownsville up the Rio Grande to the New Mexico line, a distance of nearly 800 miles. Mr. Parks' cleverly-woven word picture of that fascinating, gripping region, and its plant life is very interesting.

Vast Public Domain Given Away

When Texas won her independence at the Battle of San Jacinto, April 21, 1836, there was at her command a vast domain of public lands totaling 242,5994,560 acres. Much of this land was given away for educational and industrial purposes. Here is the story.