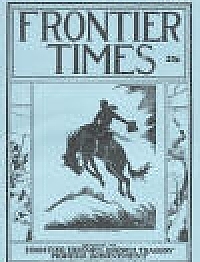 What Makes a Texan Tick?

“To understand Texas, and therefore Texans, it must be borne in mind, first of all, that Texas is big. Senator Ben (Pitchfork) Tillman of South Carolina is credited with having said (and Texans gustily repeat it) that Texas has more trees and less timber, more rivers and less water, more cows and less milk, and you can see further and see less than any durned country in the world.”

“Then Texas has picturesque creat­ures, some of whom could have escaped from Ripley's Believe It or Not. Drawings: cunning coyotes, armor-plated armadillos, prairie dogs, scorpions, centipedes, fierce javelinas (wild boars), the comical-looking roadrun­ner that kills deadly rattlesnakes, that hairy-legged, dread spider, the huge tarantula, and the fearsome-appearing but harmless horned frog, that shoots blood from its eyes.”

“And if one would understand why a Texan is like he is, it must be remembered that Texas has a history all its own. For Texas has been under six flags: the banners of Spain, France, Mexico, the Republic of Texas, the Confederacy and the United States. Texas was freed from Mexico more than a hundred years ago by bold, adventurous men from other States—some of whom had "left their country for their country's good." The expres­sion "Gone to Texas" (sometimes expressed "G.T.T.") once was in vogue in other states as the explanation for some man's sudden departure.”

Account of Berry Roebuck of Lockhart, one of the men who made modern Texas. A boyhood spent in privations and hardships did not prevent his becoming a staunch and wholesome Texan—a well-to-do and leading citizen of Central Texas. The eminent jurist, Frank Roberts, of Brackenridge, Texas, says, "A finer man never walked the earth than Berry Roebuck.

During the war between the States the scarcity of ammunition became a serious matter throughout Texas, and especially in Gillespie county. Par­ticularly was there a scarcity of caps for guns and pistols, all guns at that time being of the cap and ball make. The citizens of Gillespie county must procure game for food, and they must have fire arms for protection against the Indians. Without caps, bullets and powder were useless. Two men, Captain E. Krauskopf and Adalph Lungkwitz, met the emergency. Cap. Krauskopf was a gunsmith, and Lunkwitz was a silversmith, and both were endowed with a high degree of me­chanical skill and inventive genius. They first made their own machine for rolling the copper to proper thickness and a machine for cutting out or stamping the caps. They made both the "hat" caps ,and percussion caps for guns and pistols. For loading and priming the caps both saltpeter and quicksilver must be used. From the bat caves in the mountains around Fredericksburg they got the material for the saltpeter, and Captain Krauskopf made a trip to Galveston to get the quicksilver. They not only saved the ammunition situation in Gillespie county, but in time found a considerable market for their caps throughout this section of the country. Here is the story.

By Tex Ward, As Told to Sam Ashburn.

This dramatic story, written by the late Sam Ashburn, originator of the "From the Top of the Windmill" column of the San Angelo Standard-Times Wool and Mohair Edition of July 10, 1934. The story won national recognition when it was printed in a book entitled "The Best News Stories of 1934." Because of its interest, the story is reprinted here.

Murder of Williams and Haggett

Dreadful and bloody account of the attack of about 100 Indians that occurred in the spring of 1836 in what was known as the Hornsby settlement, part of the earliest settlers of Austin's upper colony.

The Great World War Comes to An End

“Japan surrendered unconditionally August 14th, and history's most destructive war came to an end, except for formalities. President Truman released the stirring news over the radio on that date at 6 p. m. Central War Time, and announced that he had appointed General Douglas MacArthur supreme Allied commander to receive the surrender. While the world celebrated with unrestrained joy President Truman ordered a Japanese govern­ment (which once had promised to dic­tate peace terms in the White House) to stop the war at all fronts...”