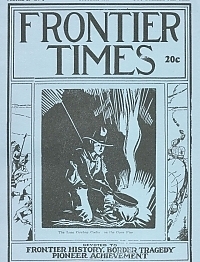 Account details a discovery made by Jess Hollis during the 1890's in San Saba county. “The location of his discovery was west of Colorado River, four or five miles from the town of Bend. At the time of discovery, Mr. Hollis was cutting posts in a cedar brake that borders on Cherokee Creek. At noon, in order to have a cool place for eating his lunch; he climbed down, from the steep bank and walked over to where the creek falls over a precipice. While eating, he looked up the bank from which he had descended and noticed a depression in the embankment caused by erosion. He noticed also that a certain spot had been filled with rocks evidently placed there by human hands. The longer he looked, the more curious he became. He walked over and began pulling out the rocks. Soon he came to a human skeleton. He carefully laid out the bones. He surmised it might be an Indian skeleton. Not only did he find bones, but there was an old copper kettle and about a quart of beads which had rotted off the string. There was also a Roman cross of beads strung on copper wire which perhaps belonged to the other beads. And there were two old ...”

A Portrait of a Texas Family

Account of Charles and Jane Power Haynes, who arrived in Texas in 1836 and their struggles and joys as early texas pioneers.

Mentions: * Walnut Creek that meanders through the pastures of the Flying V Ranch * the Haynes Family Association * Patricia Ann Gatliff * the Russels * the Duncan family* an inheritance from a Dutch ancestor who came to America from Holland in 1630

Account of David A. Trousdale, who became nationally known when he single-handedly prevented a major train robbery by two armed desperadoes, while serving with the Railway Express Agency, formerly Wells Fargo and Co during March of 1912. At the time of the attempted robbery, Trousdale recalled, he had been assigned as a Wells Fargo and Co. express messenger on the regular service run between San Antonio and El Paso. Here is the story.

Took the First Herd to Montana

Account of Cattle-driver, Nelson Story and the thousand-head herd of cattle up the Bozeman trail of 1866 and the historical questions that surround that event.

A PIONEER MOTHER PASSES ON.