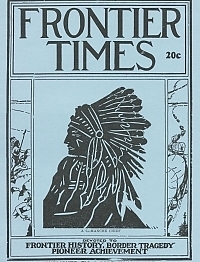 Rip-roaring Days in the Oil Fields

Account of days in and around Eastland, Texas oil belt during boom days of 1920's.

Among the many tragedies which occurred in Grayson during the very early days, was the murder of a man named Daugherty on Bois d'Arc creek, the account of which is related by Mrs. Mary A. E. Shearer, one of the early settlers of that region and is the subject of this article.

The Story of Johnny Ledbetter

Clay Chrisman, in the Baird Star.

Account details the strange events surrounding the abduction by Indians and consequent long-term disappearance of the young boy, Johnny Ledbetter in the late 1860's around Fort Griffin, TX. His whereabouts were never discovered, unless he turned out to be the strange figure who showed up one day…