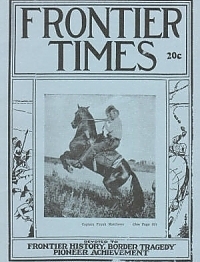 One of the most exciting and perhaps deadliest gun fights staged in Eastern Oklahoma Territory occurred in the early `90s with United States deputies and posse-men working out of Guthrie under Marshal E. D. Nix on the side of law and order and noteworthy Bill Doolin and his vicious gang of assassins, train robbers and horse thieves on the side of unlawful disorder. This gun argument is commonly designated by old time peace officers and early inhabitants as the Battle of Ingalls, and for some unaccountable reason writers and historians of pioneer tragedies and early Territorial events have either entirely ignored the occurrence or at best made very scant reference of it. Here is the account.

Account of Capt. Frank W. Matthews, Texas Ranger, who spent the greater part of his life running down criminals, maintaining law and order including many thrilling incidents of hair-breadth escapes from death at the hands of noted gunmen and skirmishes with desperate criminals wanted for murder, robbery and arson. Here is his story.

By Will N. Calhoun, Jonesville, , Louisiana

Expedition of Capt. R. B. Marcy

By John A. Focht, Professor Highway Engineering, University of Texas

This account is taken from a report by Captain Marcy in Senate Ex. Doc. 60, 34th Congress. On this expedition Captain Marcy traversed a section of Texas, which is composed now of Young, Archer, Wichita, Baylor, Knox, Dickens, King, Kent, Stonewall, Fisher, Jones, Haskell and Throckmorton counties. In April, 1854, Captain R. B. Marcy, 5th Inf., was assigned the duty of making an inspection of lands in North Texas for possible Indian Reservations. During July and August of that year he made an expedition over the watershed of the Brazos and Big Wichita rivers. There were several small tribes of Indians living along the Brazos, which were being pushed further west by the expanding settlements of the white people; the Indians did not want to go further west because of the additional exposure to the marauding nomadic Indians, and the country was more arid and did not produce for them to live. Includes map of the expedition.

From the Memoirs of General Walter P. Lane

Account of events that occurred in 1838 when the surveying party of the author, William Love, surveyor William Henderson and others from San Augustine was confronted by about 150 Comanche Indians and the bloody battle that followed.

Account details certain lesser-known incidents in the life of Captain (afterwards General) Ben McCulloch which occurred prior to the war between Mexico and the United States.

Account of John Simpson Chisum who was the most widely known cattleman in the world. He blazed the historic Chisum Trail, from the little town of Paris, Texas, where his small scale cattle investments were first begun, southwest through the center and across the desert country of the Lone Star State, then north through the Indian infested country of the Pecos Valley, in southeastern New Mexico. Features a map of the famous drive. Note.—The Chisum Trail to New Mexico is not to be confused with the Chisholm Trail to Kansas. Both of the famous cattle trails were started near the same time.

Account of wild and uproarious days toward the end of the boom time of the Ranger-Eastland oil boom. Mr Biggers goes on to relate his oration presented at the banquet sponsored by the Eastland chamber of commerce. By reading it you will understand why he was never again so much as invited to a banquet in Eastland.