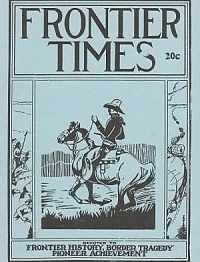 Among the many tragedies of the early frontier, there was none more brutal than the killing of Ludwig Spaeth by the Indians in the summer of 1871; and among, the many daring deeds of bravery recorded we find none exceeding that of Louis Spaeth the thirteen year old son of Ludwig Spaeth, and a witness to his father's killing. Here is the sad and noble account.

Mr. Hogue writes: “I was "raised" to the sublime degree of a Master Mason in old Milam No. 2 of Nacogdoches, Texas, about 1905, and was at that time informed it was the oldest in Texas, as the old Holland Lodge No. 1 of Houston, Texas, was out of existence; also that General Sam Houston, who at one time lived in Nacogdoches, was a charter member of Milam Lodge.”

Captain R. B. (Buck) Barry, of Bosque county, was known from the Red River to the Rio Grande as one of the greatest Indian fighters that figured in frontier warfare. From his pen we give some of his experiences while following the crimson trail during the early days in Texas.

“The crime for which (Dick) R. H. Duncan was convicted was the murder of the Williamson family of four persons, of San Saba county, Texas. The bodies were found floating in the Rio Grande, seven miles above Eagle Pass, with stones tied to them. All had their skulls crushed, and two of the women had strings tied around their throats. This occurred about the middle of February, 1889. The first information which was obtained as to the identity of the murdered family was through an advertisement inserted in The News giving a description of the bodies found. This came in the form of a letter from the sheriff or San Saba county, and upon this clew the case was worked up, resulting in the arrest of Dick Duncan and his brother, Tap, charged with the murder. Tap Duncan was afterward turned loose for want of testimony against him. H. W. Landers alias "Picnic Jones" was indicted as an accessory...”

The story goes on to describe in detail the hanging of Duncan and other details surrounding this crime.

In the early autumn of 1875 the author had an encounter with Dutch Henry, who was a notorious outlaw who had been suspected of many murders, countless robberies and untold midnight forages on the borders of Kansas and the Indian Territory for more than a dozen years. Time and again he had been incarcerated in the jails by civil authorities. He had been driven from one retreat to another by the United States soldiers from the sundry military cantonments situated in the territory. But by sheer good luck or by clever contrivance he had invariably escaped without ever having been brought to trial for his manifold crimes. This account describes the outlaw and a particular raid that occurred seventy miles from the Bankhead cantonment, and ninety miles from Fort Sill.