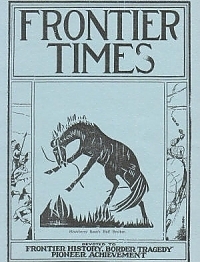 A Story of the Texas Navy

By A. Garland Adair

The history of the navy of the Lone Star Republic is not so well known as that of the army, yet the records reveal that aside from the Alamo and San Jacinto, Texas naval history was equally glorious, and during the troublesome era of nearly ten years between San Jacinto and annexation, the Texan fleet did more than the the army to protect the young and struggling democracy. Here is the story.

Presidents of the Texas Republic

Account of the life of Brig. Gen. David Sloan Stanley who was born in Cedar Valley, Wayne county, Ohio, June 1st, 1828 and served with distinction in battle on numerous occasions, and before coming to serve in Texas, was awarded the Congressional Medal of Honor for gallant and meritorious service and distinguished bravery in the Battle of Franklin, Tenn., November 30, 1864

A Popular Educator of Texas

Account of Miss Sophie Allie Nold, a well-loved teacher and daughter of Henry Nold II ,and Elizabeth Goddin Nold. Born on April Fool's day in 1848, at Richmond, Kentucky. Her teaching career began in the school's of New Castle, Kentucky. Later, in Rockport, Texas, where she moved, Miss Allie lived in the home of her sister, Mrs. T. M. Mathis, and taught in the public schools. On September 3, 1890, she opened the Noll Seminary with twenty-five pupils, and later moved the school to Victoria, where she had many day pupils and several boarding students. Among the latter was her niece, May Mathis, who became Mrs. Harry Watson of Corpus Christi, Texas.

Because of ill health, Miss Allie gave up the Victoria venture and secured a position on the teaching staff of Mary Nash College in Sherman, Texas. Later, still in her search to regain her health she moved to other places, teaching Spanish in Denver, Colorado, and teaching English in Mexico City, Mexico. Next Miss Allie moved to San Antonio, where her mother lived with her. In the Alamo City Miss Allie tutored private pupils. On April 19, 1923, Miss Allie breathed her last breath in Atlanta, Georgia. Here is her story. Further Mentions: Julia Allie Bailey * Allie Mathis * Allie Morrell * Allie Fulton Olsen.

Obit. of Dr. Travis M. Harrell, who was born in San Saba county, Texas February 8, 1862, and was reared on the frontier. For many years he was a practicing physician in Williamson county, and was one of the best known men in that section. Mentions: Mrs. Vira Douglas Harrell * Otho Douglas and Ramey Douglas