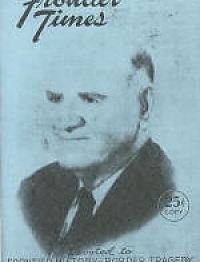 Account of Dr. R. L. Griggs, who practiced medicine in Callahan county, Texas, beginning in 1900. He was a country doctor who endured the hardships of the early days and yet kept up with modern day advances in medical science. For over forty-six years, Dr. Griggs rendered service throughout Callahan county, before the era of motor cars and good roads, and he traveled on horseback.

Mentions: Mr. C. B. Snyder, Sr. of Moran * Dr. Griggs graduated from the University of Tennessee and began his career as a physician and surgeon at the age of twenty-one.

Account of Robert Emmett Bledsoe Baylor and the founding of Baylor university. Born in Bourbon County, Kentucky, May 10, 1793, Baylor sprang from a vigorous stock which took an active part in the creation and early life of another young republic. His grandfather fought in General Washington's army; an uncle was aide-de-camp to the Commander-in-Chief; a cousin was first president of a university in Washington, D. C; and his maternal grandfather was expelled from Virginia because he vigorously preached the Baptist doctrine.

A TEXAS TOWN THAT VANISHED

Account of Senterfitt, one of the liveliest towns in Central Texas during the golden days of the cattle industry, when barbed wire fences were unknown. It was a wide-open, active town whose saloons never closed, day or night, except for funerals. Today it has no place on the map. Mentions:Rube Senterfitt, one of the first settler's of the section, who owned a large ranch near the center of the district, had a townsite surveyed out of his ranch on Salt Creek * Lometa * the great Goldsmith * Lampasas county * Mills county

Account of Ellie Logan Hall who came to Commanche county, TX with her parents, Thomas and Mary Logan in 1855. They came in a wagon drawn by oxen and filled with household belongings, flower seed, and seedlings of peach trees and pear trees. West Texas was a wild country then; there were not many settlements as far west as Commanche county, but the Logans was an adventurous family, and they were merely following the natural bent of their lives when they staked their claim to one hundred and sixty acres and called it Logan's Gap. Here is the story.

By Lieutenant Colonel Morris U. Lively

“Today when the boys and girls want convertibles to drive out to wayside restaurants for dinner, and dancing by a "name" orchestra, some of us who are a bit older may think back to the days of the early years of this century when there were no automobiles, no paved roads, no movies, when "dinner" was at the noon hour, and a hay ride was an event supreme on the social calendar.

For the summer time hay ride the boys of the "crowd" would meet and make preliminary plans. An almanac was consulted to see when the moon would be "full". The next step was to secure chaperones who would be acceptable to the parents of both the boys and the girls. The proprietor of the local livery stable was consulted as to the price of a wagon and team and driver for the evening. The wagon was to be a flat bedded dray, very low, and well padded with hay, over which a wagon sheet was to be tied securely and tight, and the livery stable was to provide an extra sheet to be put on the ground for dancing. The livery stable proprietor made his charge for the length of the trip, the time the team would be away, and the extra cost a "competent hand" to drive.”

“San Saba was founded 80 years ago by David Matsler, his wife and a son They migrated from Burnet county and settled on Cherokee Creek, near the present town of Chappel, on November 7, 1854. San Saba county derived its name from the beautiful San Saba river upon whose banks the city of San Saba is located. The river got its name from the San Saba Mission near Menard, built by the Francis-can monks in 1744, which was destroyed by the Apaches in 1758, after a general massacre of white settlers.

The original Matsler homestead is still owned by the youngest son of the couple. Seven years before San Saba was founded. Count Meusebach and 39 other German university students bought the entire San Saba river valley from the Comanche Indians for $1,000 worth of trinkets, guns and other articles. Later the Germans were forced to give up their lands devoted to farming and stock raising largely due to Indian depredations...”

Texas is the only state that can offer four national tourist regions; the Gulf Coast, Trans-Pecos, Ed-wards Plateau, and East Texas for-rest belt.

Very engaging account of a man named Brock, who hailed from from Indiana, and settled around Fort Griffin. Eventually he was confined in jail, charged with the commission of an infamous crime, and condemned to die by the verdict of an overwhelming majority of a vigilance committee, living to thoroughly establish his innocence and put his persecutors to shame, a result consummated by years of unsurpassed effort and determination. In the account we find a man combatting every obstacle that poverty, persecution and condemnation could produce, but overcoming than all and gloriously achieving his purpose which was to clear his name of the awful charge of cowardly murder.

Origin of The Bowie Knife

Account of the history of the knife that came to be called the Bowie-knife; indispensable weapon of every fighting man as the American frontier pushed westward. It was used first by James Bowie in the bloody melee that followed a bloodless duel, involving Major Norris Wright, native of Baltimore, emigrant to Louisiana, curious combination of merchant, banker, politician, sheriff, deadly pistol-shot and duelist, who was the Bowie-knife's first human victim.