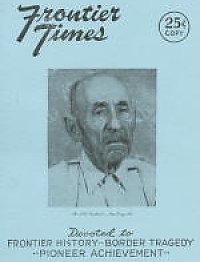 Camels Roamed The Hills of Bandera County Ninety Years Ago

With the establishment of forts at strategic points over the west, the problem of transportation of army supplies became acute, and the question of cost of transportation became a serious one to the quartermaster's department. Here is an excellent account of government's experiment with the camels in the Texas frontier in 1855-58. It was a dream unfulfilled. It was a scheme based upon wisdom; one calculated to inaugurate an entire new scheme of transportation, the result of which world have been the opening, for earlier settlement, one half of our western continent. It failed, but the failure was from causes wholly extraneous to itself.

Kenny's Fort was built in 1839 on the south bank of Brushy Creek at its juncture with Dyer's Creek. It stood opposite to where the present settlement of Palm Valley in Williamson county is located, and, although the fort has long since been demolished, a granite monument marks its site. Here is the story of its history.

"General: The Indians have at-tacked and burned the town of Linville and carried off several prisoners. We made a draw fight with them at Casa Blanca but could not stop them. We want to fight them before they get to the mountains. We have sent couriers up the Guadalupe." (Signed)

"BEN McCULLOCH," That was the message reaching Gen. Ed Burleson and Col, John H. Moore of LaGrange announcing the sacking and burning of the town of Linville on the coast, and which led to a counter-attack and one of the bloodiest conflicts the Texans ever had with the Indians. Here is the story of that event.

Extensive, tragic, and ever-fascinating story of the strange adventure of Cynthia Ann Parker, granddaughter of a pioneer from Virginia, who was kidnapped by Indians at the age of nine, married an Indian chief and grieved herself to death after her Comanche husband was killed and she was restored to her kins-people. Account goes on to trace out much of the Parker family line.

Story of the turbulent history of Black's Fort, Burnet County which was built by William Black, on land

owned by him, in 1855. Its location was about one mile south of the Bertram-Lampasas road, and nine miles east of Bertram. It was built as a defense against the Indians and a large assortment of guns and ammunition were kept there for public use. When Indians made raids in the country all men and boys in that section gathered at the fort, armed themselves and went out to battle. Here is the story.

Of the many unsung heroes of early Texas, Martin Palmer (Parmer) is one whose life was one of romantic adventure. Descendent of the Palmers who carried the palms in the Crusades, this man was one who truly lived up to his name. From the first Palmer—William who came to this country in 1621, in the good ship "Fortune." through Colonial days, through the westward migration, the Palmers wended their way through the history of America, from Virginia, to Kentucky, to Tennessee, to Missouri. Here is the story of the Palmer family after 1825 when they settled in Texas, in their new home at Mound Prairie, now near Alton in Cherokee county.

Account of the life and experiences of J. T. Russell; retired cowboy and stock raiser, of Winters a small town in Runnels county, Texas. Uncle Johnny, as he was called, was born in Alabama in 1862, and came to Texas when just a small boy with his parents. His father was killed in the Civil War, and his mother died while he was yet a youngster. He lived in Milan county until 1878 when he came to Runnels county.

“There are many requests for the song about Sam Bass, early day desperado whose grave is in the Round Rock cemetery; hence, the ballad is printed. Many papers have printed the song in part, but it is known to have been lengthy. Mrs. Ed McNeese furnished the verses printed below, from an old copy of Farm News, Dallas. That paper suggested that readers who knew the verses send them in, and received forty-two contributions. The 20 stanzas were thus procured and the News believed them to be the nearest correct and complete version obtainable. (It will be observed that the song writer's poetical feet were not well-mated, but it is typical of a type of the rhymsters of that day).

Sam Bass was born in Indiana,
It was his native home; And at the age of seventeen
Young Sam began to roam.
He first came out to Texas, A cowboy for to be;
A kinder hearted fellow You hardly ever seen.
Sam used to deal in race stock,
Once called "The Denton Mare," He matched her in the scrub races
And took her to the fair.
Sam always coined the money
And spent it mightily free;
He always drank good liquor
Wherever he might be.
Sam Bass had four companions, Four bold and daring lads,
Jim Murphy, Jackson, Underwood, Joel Collins and...”

Account of John J. Long who was in the forefront of that bold and hardy army of pioneers who came into the Texas Panhandle to settle during the 1870s and 1880s. He was born in Fayette county, Pennsylvania, November 7, 1851. He came to Texas in 1874 with the General Nelson A. Miles expedition. This is his story.

A Few of Quantrill's Men In Texas

By WILL N. CALHOUN

Account of events around 1866, of that noted George Todd company (Quantrill's Brigade, C. S. A.), who had followed General Joe Shelby into Mexico, at the fall of the Confederacy. How many of that gallant band remained and came to Texas is not clear, but at least six, to-wit: L. M. White, George McQueen, Lee McMurtry, Bill Griggsby, Jarret Todd, and Allen Palmer. Here is the story of these men and their experiences in Texas.