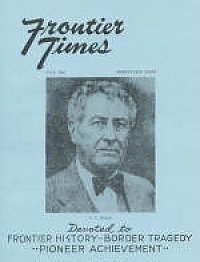 (The following article is taken from Don H. Biggers' rare book, "Shackelford County Sketches," and published in Frontier Times by permission of the author. The book was published in 1908, and many changes have since taken place, but the facts of history have been preserved in the article, and we are glad to pass it on to our readers just as Mr. Biggers wrote it. — Editor.)

"To The Last Man" Is Ex-Rangers Motto

G. A. Holland Passes On

Story of one of the useful pioneers of Weatherford, G. A. Holland, who was born in Kentucky in 1859, and came to Texas in 1882. He was a banker, a mayor of Weatherford three terms, a delegate to the 1932 Democratic convention that nominated Franklin D. Roosevelt for the first term; a Democratic elector ; a developer of Parker county through the establishment of post offices at Poolville and Peaster, and banks at Millsap, Peaster and Poolville; a school board member for twenty years, and as a Parker County Selective Service Board member during the early part of World War II.

The March On Anahuac

Mentions numerous vital facts and divers incidents arising in 1835, from May to August, inclusive, which give sense and direction to the last four months of this year; and a knowledge of the main happenings of May and June, essential to a clear understanding of the organization of the provisional government of Texas, and the military campaign of 1835.